What We Learned from Watsi's Data

Last week, we put together a little event called Analytics for Good where Watsi, an awesome nonprofit that funds health care for people around the world, opened up their Segment SQL data for our partners to explore.

Top notch analysts from Looker, Chartio, and Mode presented insights they found in Watsi’s data and made recommendations to drive growth. Along the way, we discovered that the strategies they used could help grow any business, not just nonprofits.

Here is a breakdown of the activation, retention, and conversion analyses they built for Watsi that you could use, too. Erin Franz from Looker and Benn Stancil from Mode suggested focusing on two areas to increase activation: analyzing power users and defining sessions in a way that makes sense for your business. 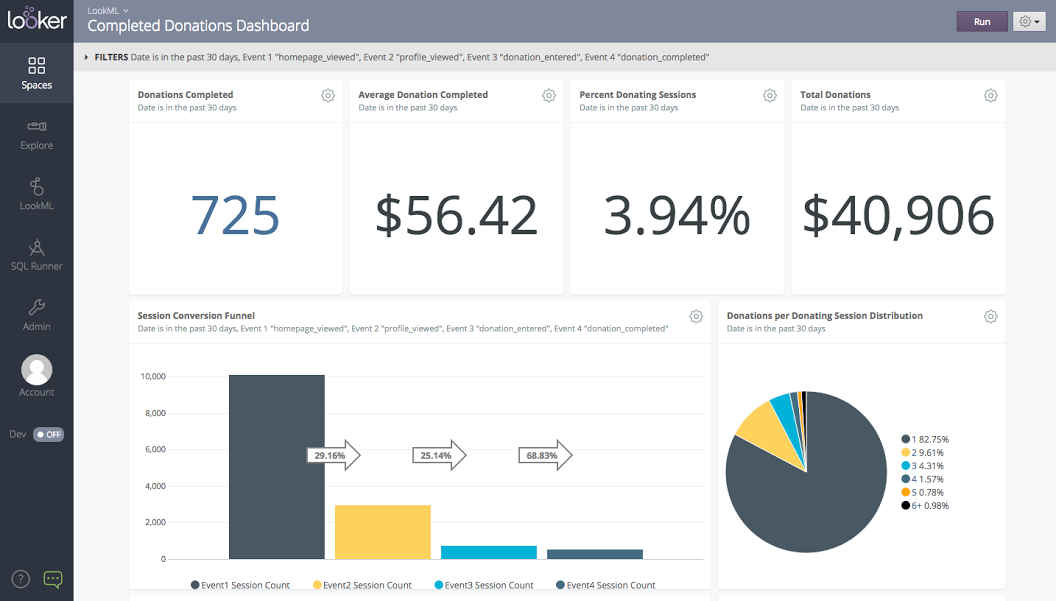 Analyzing power donors, Erin showed Watsi a breakdown of users that donate multiple times in one site visit. She found that 17 percent of donors fall into this segment, and suggested Watsi run experiments to crank up this number. She also recommended that Watsi use the multi-donation metric as a benchmark to measure the effectiveness of future activation and marketing campaigns.

With the power users grouped into a single segment, Benn suggested that Watsi analyze what actions these do-gooders have in common—Did they all view multiple patient profiles or come to the site from the same traffic source? Did they visit Watsi’s website multiple times before donating? Based on the answers, Watsi could reorient the flow of their website to encourage power user behavior.

Mode calls this exercise finding your “aha” moment and has a neat playbook that helped Watsi find common actions among people who redeem gift cards and later sign up for the Universal Fund. 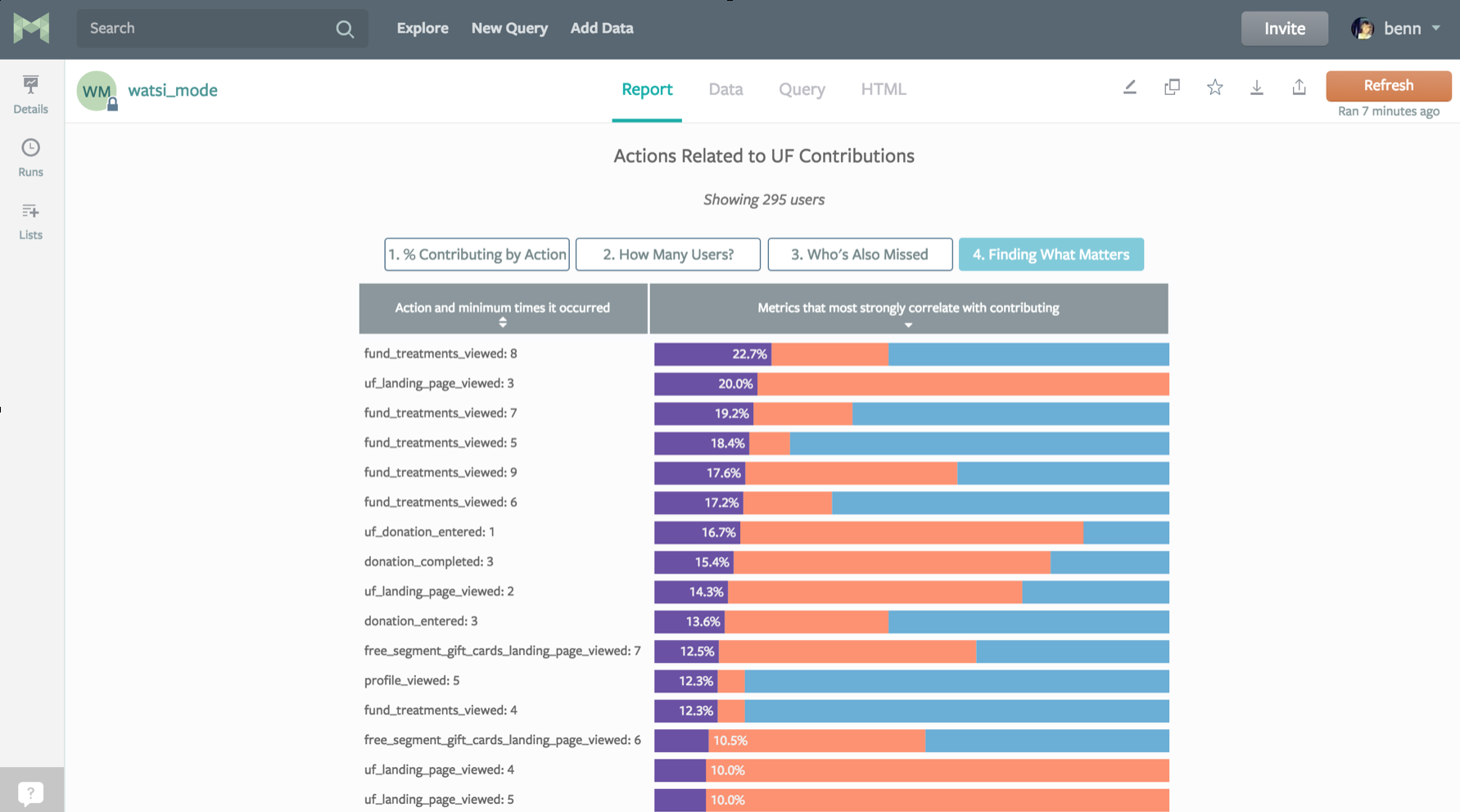 Erin from Looker also talked about the importance of defining a user session, or a unique period of user activity, that makes sense for your business. Most important analyses (like the finding the “aha” moment which we just discussed and analyzing time between funnel conversions, which we’ll touch on later) are based events that occur in specific sessions. As a result, it’s important to make sure the way you measure sessions reflects how customers use your product.

For Watsi, Erin defined a session as a period of user activity followed by 30 minutes of inactivity, mirroring how people browse the web. BI tools that run on SQL give you the flexibility to completely customize how you define sessions. Some out-of-the-box tools like Google Analytics also give you some flexibility to choose session length.

As you could imagine, getting users to donate once isn’t enough to make Watsi’s business sustainable. Finding a way to encourage repeat donations, on the other hand, is an opportunity for steady growth. For this reason, Aaron Heise and Barry Parr from Chartio looked into retention: How can we get people to come back for more, and what’s stopping them from doing so? 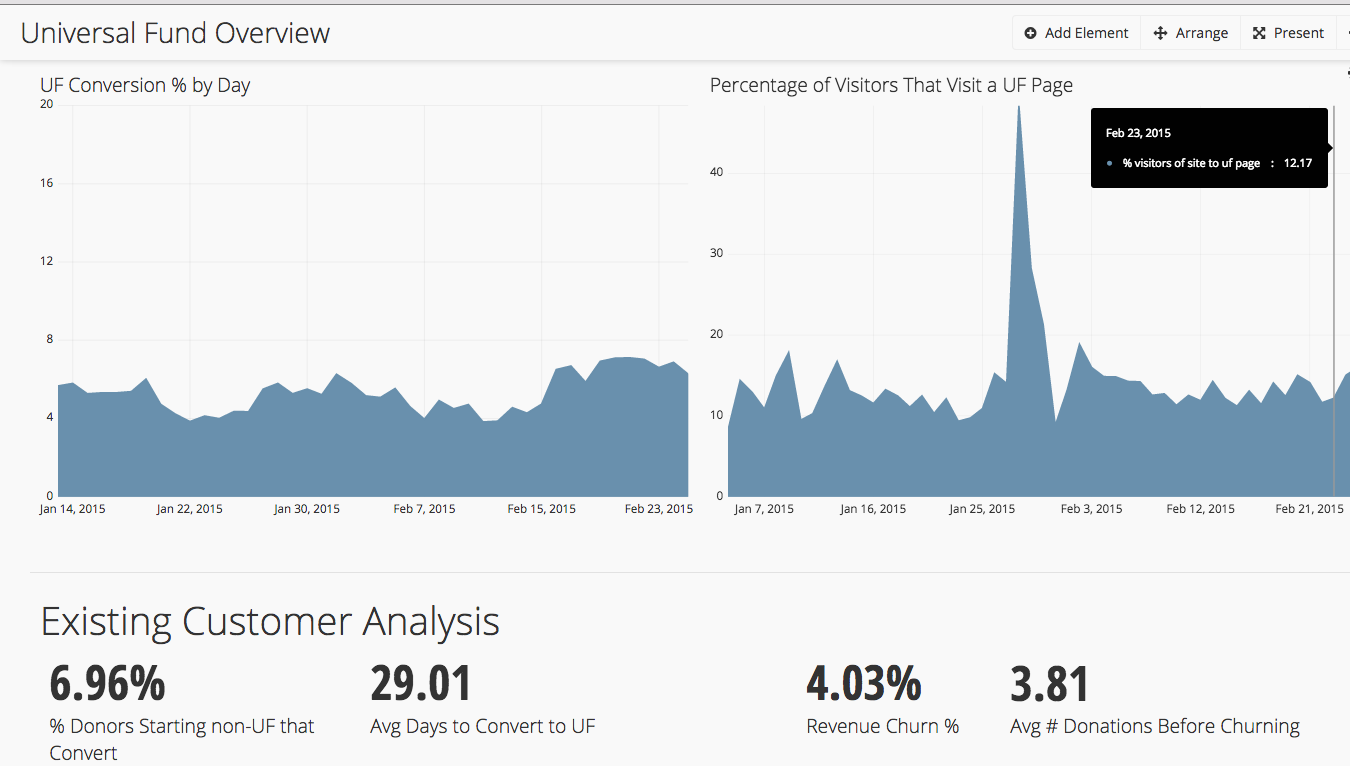 Aaron from Chartio started by analyzing churn, or the percentage of people over a given period of time that cancelled their recurring donations to Watsi’s Universal Fund, which turned out to be about 4 percent.

Anything in the single digits driving toward zero is a healthy churn-rate for a SaaS company, so Watsi’s 4 percent is pretty good. That said, there is always for improvement, and Chartio asked Wasti if they had any data on why people were churning.

Thomas Bukowsi from Watsi mentioned they occasionally email people asking why they cancelled. So, Chartio suggested automating this process to collect a more comprehensive data set. That way, Watsi could identify the top reasons for churn and work to fix them. To do this, Watsi could create an analytics event called “Cancelled Subscription” that triggers in-app messages through Intercom or emails through Customer.io. These messages would automatically ask ex-donors why they are canceling. 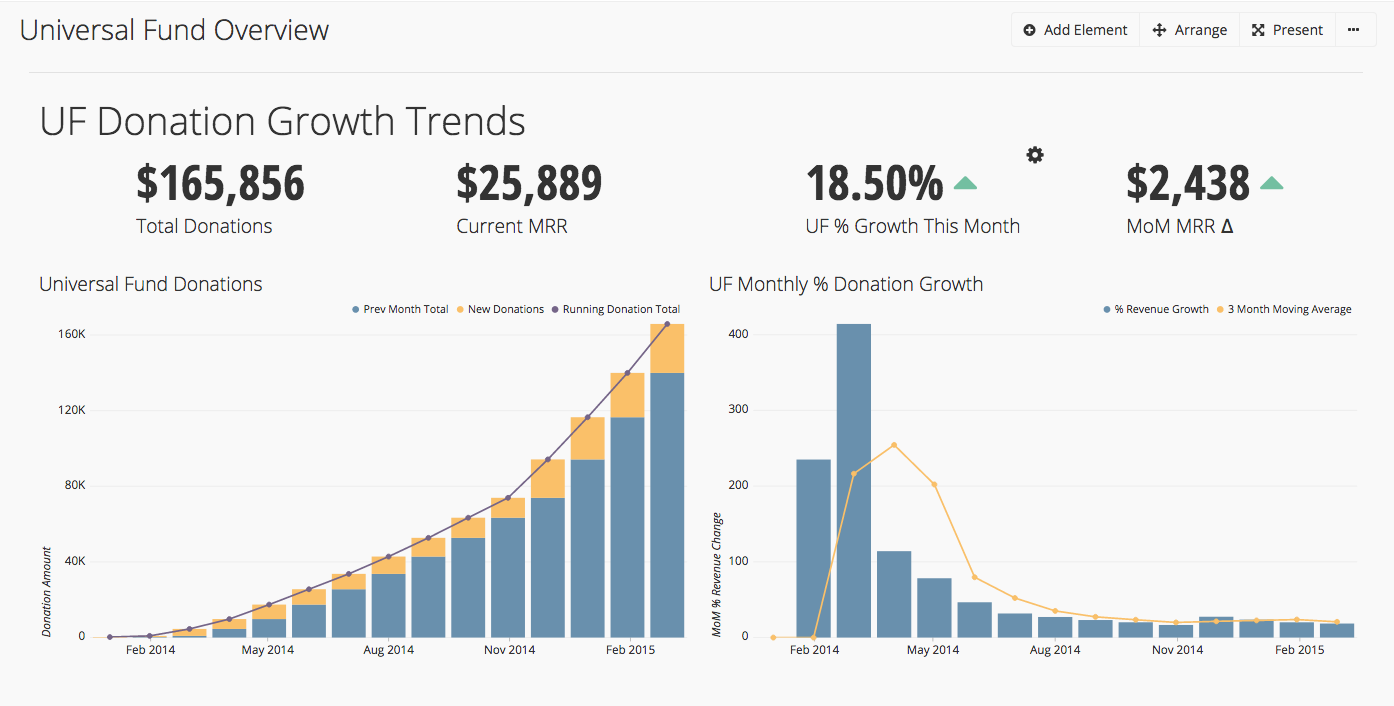 Aaron and Barry also found that, on average, it takes Watsi donors more than a month to make a second donation. This insight was a bit surprising because after a month people usually completely forget about products they’ve tried.

Grace Garey from Watsi hypothesized that after someone makes a donation to a patient on Watsi, it takes about a month for that patient to get fully funded, and for Watsi to email out a success story on their surgery. Because these emails are likely driving repeat donations, Chartio recommended Wasti test sending more emails earlier in the process that feature other patients’ success stories.

After Chartio and Looker suggested plugging up the holes in Watsi’s funnel, Benn from Mode recommended ideas for optimizing conversions, or getting more donations from the same product. 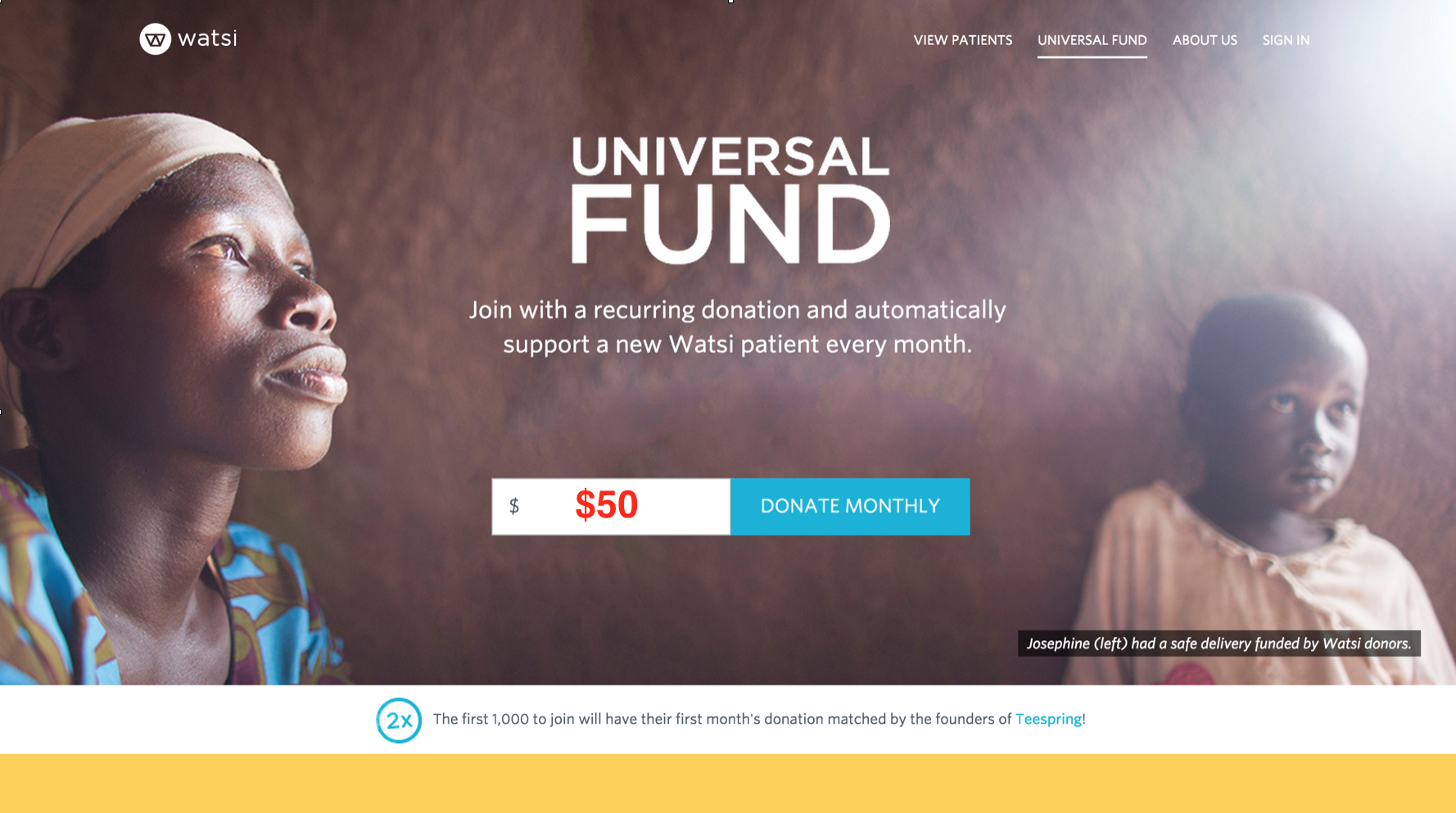 First, Benn suggested Watsi experiment with anchoring on their Universal Fund landing page. The page currently features a blank state where you can enter any donation amount you want. People give on average $35 per month with this blank state. Benn asked, might anchoring the donation at $50 or $75 a month drive multiples of revenue?

Similarly, Barry from Chartio suggested Watsi play around with anchoring for tips. Because Watsi gives all of their donations directly to patients (which is pretty freaking awesome), they ask for “tips” to help cover administrative costs. Barry dug into the tip analysis and found that the amount a person donates does not affect the percentage they tip. For example, one person who donates $20 and another who donates $100 will likely tip the same percentage.

Barry suggested testing some different anchors for tip donations (currently 10%, 15% and 20%). Specifically he recommended upping the middle option based on research that consumers tend towards the middle price–no matter what that price is.

Benn from Mode structured his entire presentation around testing different traction channels to find a sustainable growth engine. These were his methods: 1) Look at what’s working. 2) Figure out if it’s repeatable. 3) Optimize.

He started by investigating spikes in Watsi’s data to see whether they could be recreated. While he found that launches on Hacker News were unpredictable, corporate Gift Card donations could actually drive 300% growth by getting users who redeem cards to sign up for the universal fund.

Watch his fascinating presentation and the entire live event here.

Each recommendation our partners gave to Watsi started with analytics—assessing the current state of affairs. Next, experimentation—product design, email marketing, and user feedback to improve the state of affairs. Then, analytics again, to see if the experiments actually improved their initial metrics.

What does Segment have to do with it? Watsi uses Segment to collect, transform and send their data to their growth tools—Looker, Chartio, Mode, Customer.io, Optimizely, CrazyEgg, Olark, Perfect Audience—with the flip of a switch. And, they get Segment for free because they are willing to open up their data to the community. :)

If you’re interested in our options for non profits, shoot us a note! Or, to become a part of the data and donate to Watsi yourself, sign up for the Universal Fund today! Take me to Watsi.

Thanks again to Wasti, Chartio, Looker and Mode for their awesome insights! 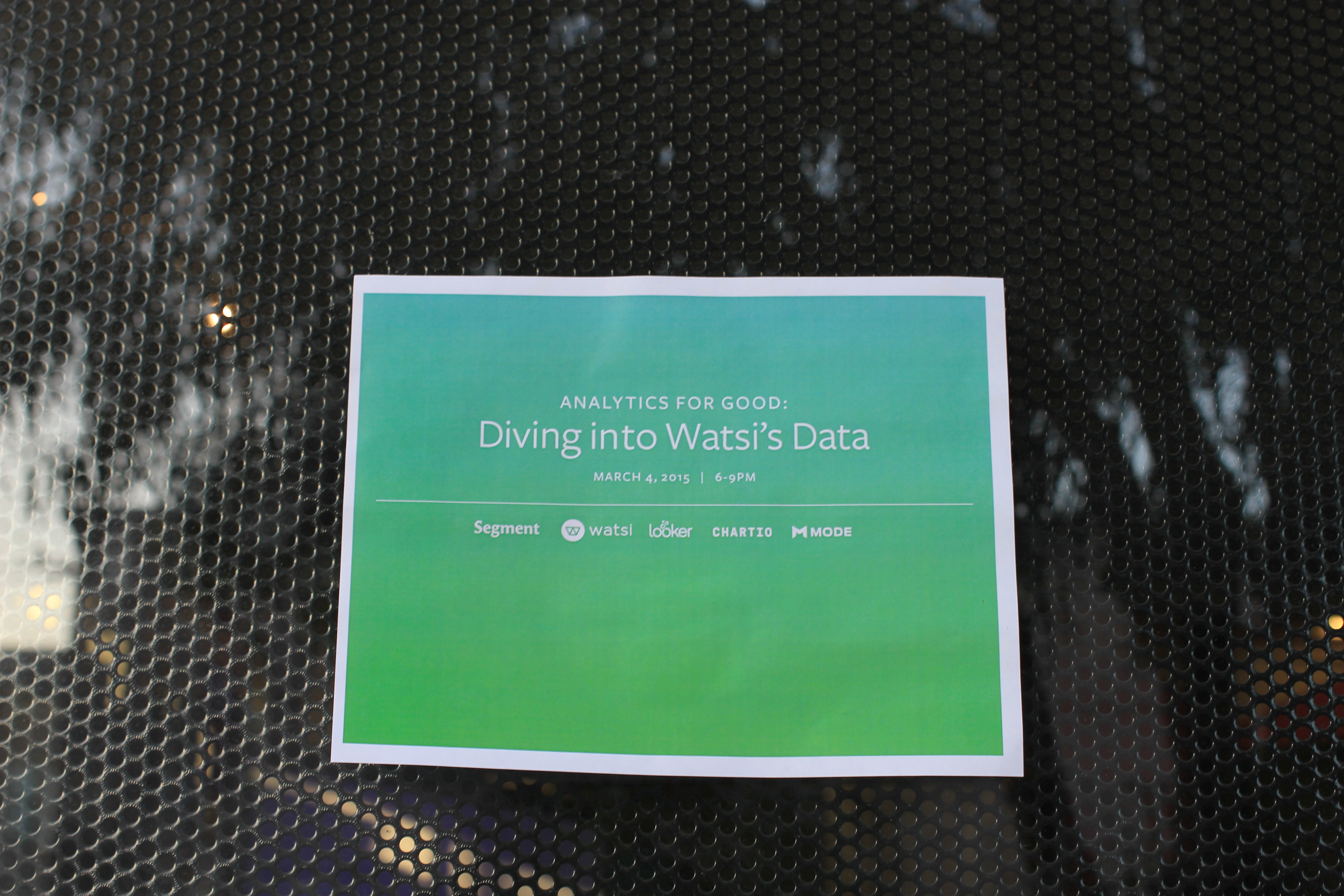