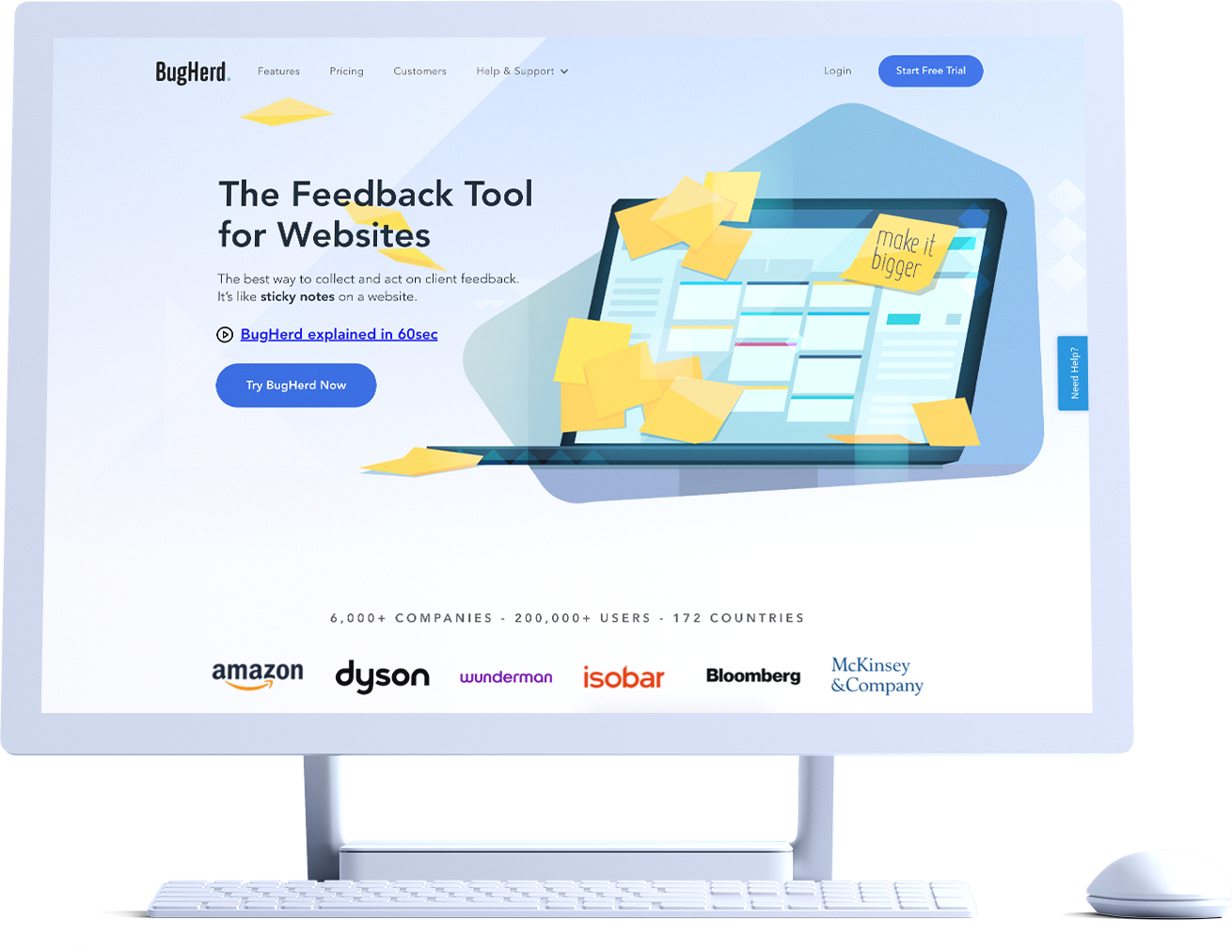 “We were a typical startup—we just didn’t have the resources to run the reports we desperately needed. Segment became that resource.”

BugHerd is a visual feedback tool for websites. It helps users collect feedback from clients and track “bugs” directly on a webpage. With a simple point and click, users send feedback to dev teams to track tasks visually. BugHerd sends complete and contextual information (including screenshots, browser, OS and CSS selector data) to be fully managed via a project and task management board. As their website notes, “It’s like using sticky-notes to capture and pin visual feedback directly onto a page.”

BugHerd was founded in 2011 and is headquartered in Australia. As a Series A startup, the company has had three successful funding rounds and raised $1.5M to date. BugHerd currently employs 17 people.

Like many startups, BugHerd wanted to create new products to increase their revenue. They decided to develop three: BugHerd TNG (The Next Generation), Stack (a new task management product), and Brief (a new client/agency tool). However, as a small team, BugHerd had limited engineering hours and needed to maximize their resources. This meant that they had to ensure their new products were a good fit for the market to warrant the resources put toward developing them.

To do this, BugHerd needed to evaluate their three new products with a soft launch to effectively prioritize their scant engineering resources. The company determined that they would like to evaluate their new products using a combination of: acquisition rates, onboarding rates, usage rates and customer responses to the question, “How disappointed would you be if you couldn’t use X product?”

Fortunately, BugHerd had been measuring metrics from day one, and that aided them in averting a potentially disastrous outcome. As they started to collect the data, they realized that their newly soft launched products were not a good fit for the market.

They saw 70% of users in the original product successfully onboarded, yet less than 30% succeeded in utilizing their new product, BugHerd TNG. With their original product, BugHerd was able to convert about 1 in 6 customers to paid, but with Stack, it was closer to 1 in 50 (and at an average of $15 instead of $50). With Brief, not a single one of their beta customers converted to a regularly active user.

BugHerd was already using Segment for the Connections functionality, quickly hooking up, evaluating and choosing marketing and analytics tools best suited for their stack in quick iteration. The BugHerd product and engineering teams decided to track key activation and usage metrics through Segment from those three new soft launch products.

In the past, the BugHerd team built their own admin and analytics dashboards internally. While these delivered what BugHerd needed, they required ongoing management and consumed resources that could have been used for developing their products. “Solving a problem that wasn’t a core focus was probably a mistake,” reflected Chanie Hyde, Head of Marketing at BugHerd. Having experienced this drain of developer resources away from their core focus, the BugHerd team decided to use Segment to implement new analytics and connections, saving BugHerd precious development time.

BugHerd added Segment to all products and development environments, and then used Mixpanel and Google Analytics to track activation and usage of their products, such as:

Hyde enthusiastically noted, “BugHerd is a tool that acts like a translator between tech and non-tech people, so we can recognise and appreciate when a product does the same for us!”

After 18 months of development work, BugHerd decided to cease work on the new products and redouble their efforts on the original BugHerd product, which—despite this setback—is going strong today.

“Had we not uncovered these insights with Segment, and reprioritized our original product over new ones, we might not still be in business today,” Hyde commented. It was an expensive mistake to make, but it wasn't fatal. Having a clear understanding of what made BugHerd’s product tick and how adoption and usage are measured, they were able to change course before it was too late.

BugHerd realized they had failed to listen to the customer and instead focused on what they, as a company, wanted to achieve. Segment helped BugHerd’s team quickly realize this using important data insights to drive decision-making rather than relying on company ambition, assumptions or emotion. In the end, BugHerd’s additional efforts toward their original product has proved to be the best move for the company—a result that they credit Segment with helping them make.