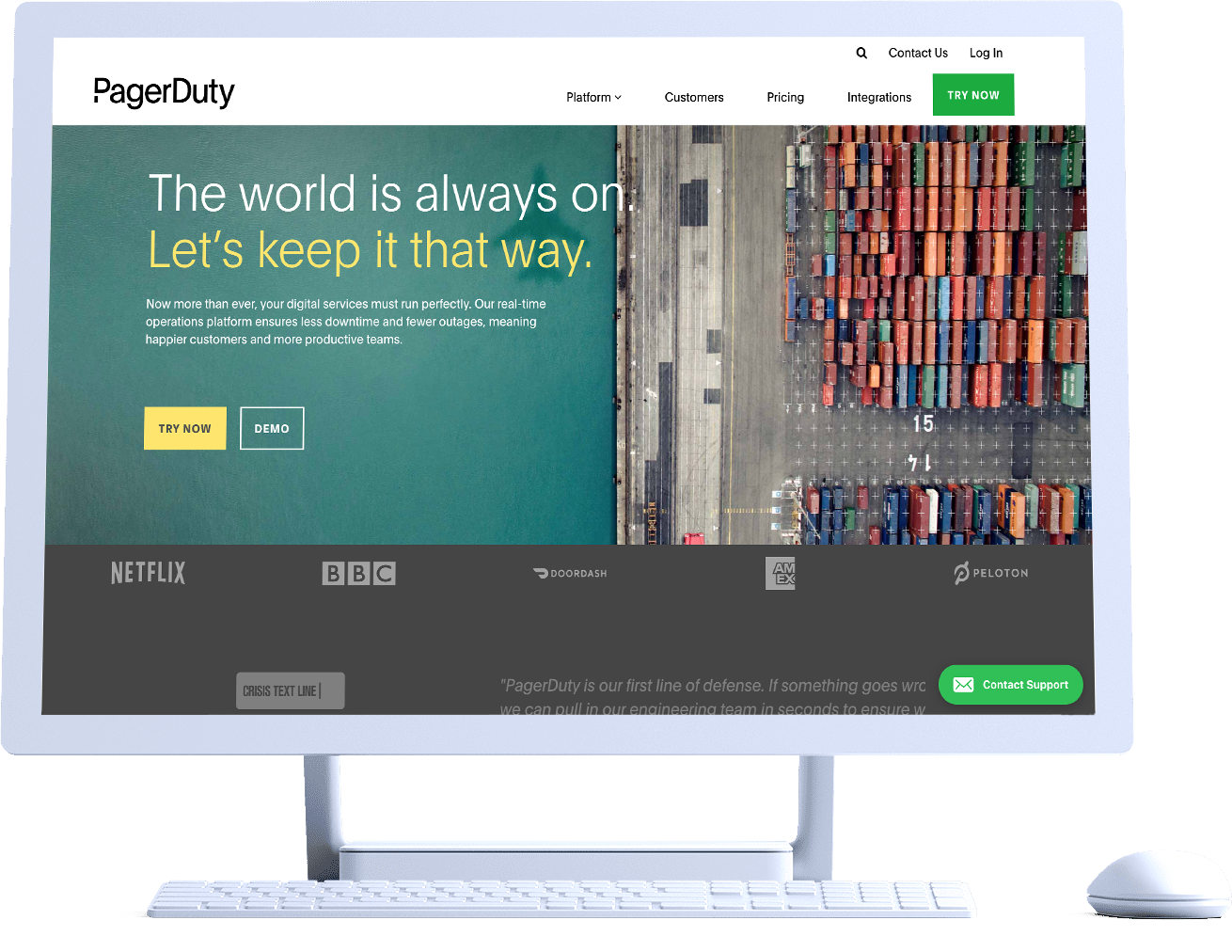 “Using Pendo and Segment to create this onboarding flow, rather than building it out as part of the core PagerDuty product, saves valuable time for engineering. ”

PagerDuty is an incident management platform that unifies developers, DevOps, IT, and business leaders to respond to critical disruptions. Customers gain a unified view of application, service, and infrastructure health, while enabling them to orchestrate incident response workflows.

With a rapidly expanding user base, the company wanted to quickly and efficiently onboard new users and turn them into lifelong customers. PagerDuty turned to Segment and Pendo for a complete view of product and customer data. The program team tested several onboarding flows and adopted a new universal progress bar to increase user onboarding efficiency and adoption.

PagerDuty was experiencing explosive growth as a result of its successful 2019 IPO. While this is an enviable problem to have, the company faced the challenge of onboarding new users at scale. This difficulty was only amplified by the extremely tailored onboarding process the team had implemented to support many different user personas.

Hailey Hickman, a program manager at PagerDuty, had the task of designing a new way to onboard users to the company’s mostly self-service platform. Her mission was to present that onboarding flow to users in an unobtrusive and dynamic way, so customers could consume the information and guidance at their own pace without being overwhelmed—or annoyed.

Personalization at scale with Segment and Pendo

Using Segment’s bi-directional Pendo integration, Hickman personalizes messages to a user’s individual needs at any given time. By feeding Pendo with user behavioral data captured by Segment, Hickman has designed a responsive, guide-based onboarding system that morphs as each user completes actions in-app. The presentation looks different for each user depending on what they’ve already learned to do in the software.

As an initial test of the concept, they hoped to influence free trial conversion rates among administrative users. “We wanted to figure out ‘What is the ‘A-ha!’ moment for them” Hickman says.

To encourage users on these paths in real-time, PagerDuty rolled out a series of guides in Pendo to test messaging and user behavior. It worked: For the mobile app goal, the approach netted at 178% increase in downloads when users were shown a guide.

With that proof in hand, Hickman and the team decided to push this idea beyond just one-off guides, which the user could dismiss and then not see again. And the answer couldn’t just be “more guides.”

To uplevel this content campaign, PagerDuty used Segment to develop an onboarding nurture bar --  a subtle, omnipresent guide placed at the top of the user interface that displays all three goals, at all times. Integrating Pendo and Segment offers a more dynamic element to the bar: As users complete each of the three goals on the platform, Segment detects those actions and feeds them into Pendo, which updates the bar to reflect when each task is complete.

A more tailored onboarding experience, with little or no code required

In the first month the nurture bar was live, Hickman says about 10% of PagerDuty admin users were engaging with it regularly. The team plans to roll out the nurture bar to other user personas in the near future.

“We're starting with the owner and the admins that are getting the account set up. But we also want to do the users, the responders, the stakeholders and their flow will be a little different. [It's] equally important that they understand the value and the purpose of PagerDuty as it relates directly to them,” Hickman says.

Next up are plans to marry the Pendo-Segment integration with Marketo, so that tailored emails can be sent to users based on their interactions with the guides and their in-app actions.

Hickman says “using Pendo and Segment to create this onboarding flow, rather than building it out as part of the core PagerDuty product, saves valuable time for engineering.”

Pendo also offers the ability to iterate more quickly, and the Segment integration makes the onboarding experience feel tailored to each individual user by reflecting the progress they’ve made—all with little or no coding required.