With Segment, Smartcar was able to significantly increase the number of applications built on the Smartcar API. 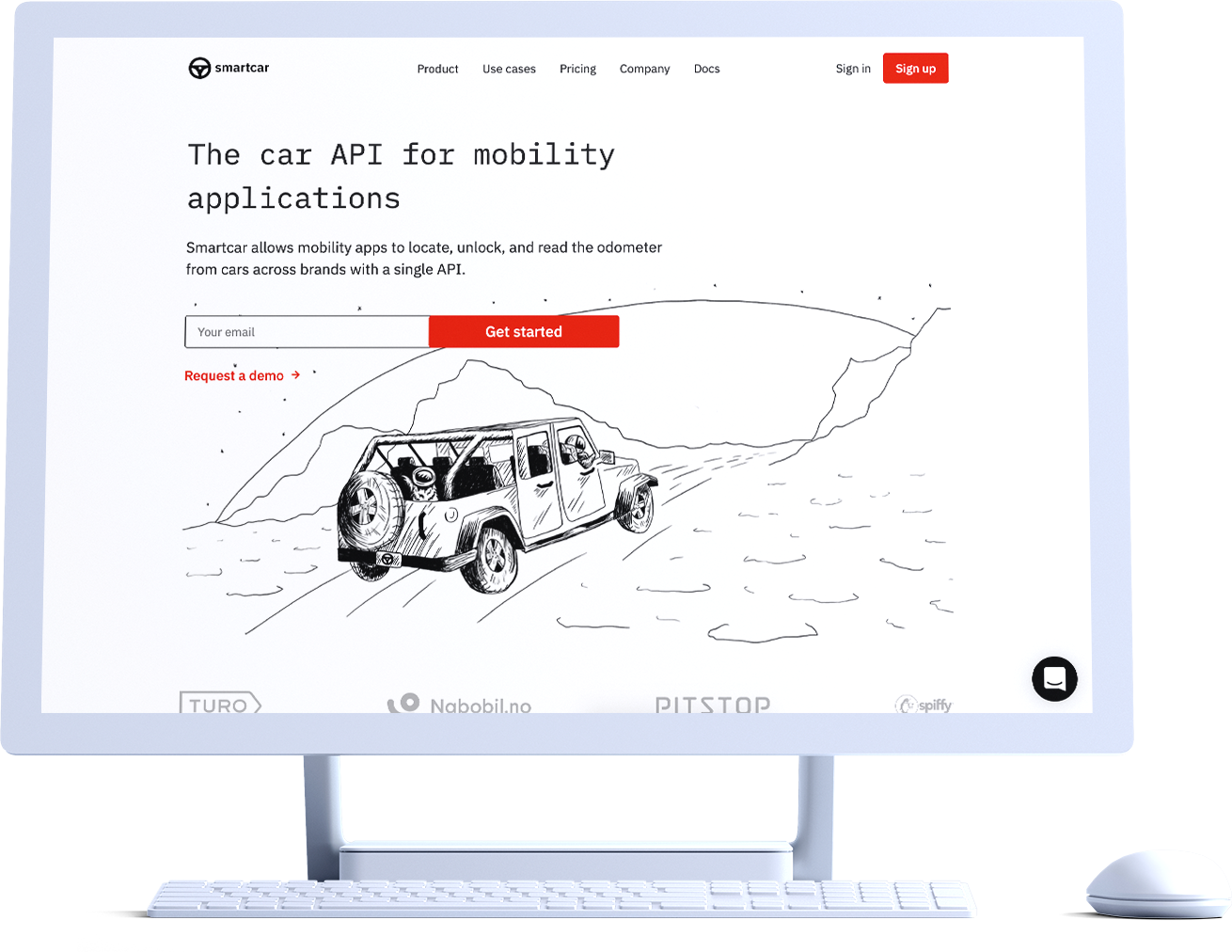 “Thanks to insights we uncovered with Segment data, we were able to significantly increase the number of developers who registered their apps on the Smartcar platform.”

Founded in 2015, Smartcar offers an API that makes it easy for applications to access data from cars and send digital requests to them—regardless of the car’s manufacturer and without the need for hardware. By transforming multiple complex integrations with different car manufacturers into a single development effort, Smartcar removes a significant pain point for developers. The platform has helped app development companies keep pace with rapid innovation in the connected car industry, supporting a wide range of use cases—from keyless car-sharing to on-demand car washing.

As a new service in an emerging industry, Smartcar had little information about how exactly developers were using its API and what improvements it could make. Moreover, developers aren’t Smartcar’s only users—when a developer builds an application with Smartcar, its users are required to complete Smartcar’s authorization flow. The customer must log in with the car’s credentials and grant the application access to a specific set of permissions.

“Before Segment, we couldn’t monitor our end user interactions and had to rely on qualitative feedback from friends and developers. We had no notion of how many people ‘dropped off’ during the authorization flow, and we had no way of telling whether the new features we added were producing positive results,” explained Sanketh Katta, CTO and co-founder of Smartcar. With two key audiences to satisfy, Smartcar needed a way to track and analyze all of its users’ behavior.

Unsurprisingly, each team at Smartcar had different analytics needs. The marketing team wanted to track engagement and retention in Mixpanel, the business team wanted to send targeted campaigns to prospects based on specific interactions using Intercom, and the engineering team wanted to pipe user event data into Amazon S3 buckets for storage and advanced analysis. All of this information was vital to Smartcar’s business goals, but there wasn’t a single tool that would satisfy every team’s requirements.

After extensive research, Smartcar discovered Segment. Segment offers seamless integrations with hundreds of analytics providers, and therefore, wouldn’t require any team to compromise on its data needs. Smartcar easily integrated Segment and, as a result, was able to federate its data out to all of the tools its teams wanted, including Mixpanel to track user behavior, Intercom to route Intercom interactions—such as the initiation of a chat—to Mixpanel, and Amazon S3 to do deep analysis.

As a growing company, Smartcar also appreciated the flexibility that Segment offered. If down the line, the company wanted to switch from Mixpanel to another analytics provider or utilize data from other services such as Mailchimp or Salesforce, the transition would be simple.

By using Segment to integrate data from multiple sources, Smartcar’s product managers and engineers unlocked actionable insights to improve the user experience for both of its key user groups: developers and vehicle owners.

To identify potential friction points that developers faced when integrating Smartcar’s API into its apps, the team used Segment to send data from Smartcar’s dashboard to Mixpanel. This provided Smartcar with a more detailed view of developers’ journeys — making it possible to analyze how developers flowed through its applications, where they clicked after submitting an application, and how often they failed to register an app after creating an account.

By leveraging this new information, Smartcar discovered that a large percentage of developers who signed up neglected to register an app, primarily due to confusion about the information requested at a particular stage of the sign-up process. Smartcar also noticed that users left the site immediately after registering an application because the site neglected to outline clear next steps. To address these issues, the team redesigned the Smartcar dashboard so that creating an account would automatically generate an application and provide clear links to resources that would help users get started.

Since the redesign, 30 percent of Smartcar’s new users fully completed the application process, compared with only eight percent who did so prior to the redesign. Additionally, 20 percent more users engaged with resource links, effectively increasing overall usage and adoption rates.

“Thanks to insights we uncovered with Segment data, we were able to significantly increase the number of developers who registered their apps on the Smartcar platform,” said Katta.

The Smartcar team also drastically reduced the number of clicks required for developers to run a demo app—from 10 to 4. On average, it now takes developers less than one minute to run Smartcar’s demo app.

Because every customer of an application that uses Smartcar’s API must complete Smartcar’s authorization flow, it’s essential that this experience is as seamless as possible. If not, developers may choose other options for car APIs. Prior to using Segment, Smartcar had no visibility into this process. At which point in the flow did more users tend to drop off? How many users drove vehicles that Smartcar didn’t support? What were the makes and models of these vehicles?

With Segment, Smartcar can now track a user’s interactions before logging in—and then retroactively associate those events with the user's profile after the user completes the authorization process. As a result, Smartcar was able to identify pain points in the authorization process and prioritize building support for certain types of vehicles based on user demand. Additionally, the integration allowed Smartcar to segment its users based on specific criteria, such as the make and model of their cars, which enabled the team to personalize user communications.

“Building a user-friendly API isn’t always easy—especially if you want to appeal to your users and their users. Thanks to Segment, we can focus on both areas in one go, and give our team the chance to measure and evaluate the things they feel are most important,” said Katta.