As part of our push to open up what’s going on internally at Segment – we’d like to share how we run our CI builds. Most of our approaches follow standard practices, but we wanted to share a few tips and tricks we use to speed up our build pipeline.

Powering all of our builds are CircleCI, Github, and Docker Hub. Whenever there’s a push to Github, the repository triggers a build on CircleCI. If that build is a tagged release, and passes the tests, we build an image for that container.

The image is then pushed to Docker Hub, and is ready to be deployed to our production infrastructure.

Before going any further, I’d like to talk about the elephant in the room: Travis CI. Pretty much every discussion of CI tools has some debate around using Travis CI vs CircleCI. Both are sleek, hosted, and responsive. And both are incredibly easy to use.

Honestly, we love both tools. We use Travis CI for a lot of our open source libraries, while CircleCI powers many of our private repos. Both products work extremely well and do a fantastic job meeting our needs.

However, there’s one feature we really love about CircleCI: SSH access.

Most of the time, we don’t have any problems configuring our test environments. But when we do, the ability to SSH into the container running your code is invaluable.

To put this in perspective, Segment runs our entire infrastructure with hundreds of different microservices. Each one is pulled from a different repo, and runs with a few different dependencies via docker-compose (more on that later).

Most of our CI is relatively standard, but occasionally setting up a service with a fresh environment requires some custom work. It’s in a new repo, and will require it’s own set of dependencies and build steps. And that’s where being able to run commands from within the environment you’re testing against is so handy – you can tweak configuration right on the box.

To work with all of these different repos, we wanted to make it trivially easy to setup a repo so that it has CI enabled. We have three different circle commands we use regularly, which are shared amongst our common dotfiles. First, there’s circle() which sets up all the right environment variables and automatically enabled our slack notifications.

Additionally, we have a circle.open() command which automatically opens the test results right from your CLI in your browser

And finally there’s the circle.badge() command to automatically add to a badge to a repo

Now given the fact that we have hundreds of repos, we have the task of keeping all the testing scripts and repositories in-sync when we make changes to our circle.yml files.

Maintaining the same behavior across a few hundred repos is annoying, but we’ve decided we’d rather trade abstraction problems (hard to solve) for investing more heavily in tooling (generally easier).

For that, we use a common set of scripts inside a shared git repo. The scripts are pulled down every time the test runs, and handle the shared packaging and deployments. Each service’s circle.yml file looks something like this:

It means that if we change our deploy scheme, we only have to update the code in one place rather than updating each individual repo’s circle.yml. We can then reference different scripts depending on what sorts of builds we need within the individual service repo.

Finally, the entire build process wouldn’t be possible without Docker containers. Containers have greatly simplified how we push code to production, test against our internal services, and develop locally.

When testing our services, we make use of docker-compose.yml files to run our tests. That way, a given service can actually test against the exact same images in CI as are running in production. It reduces the need for mocks or stubs. 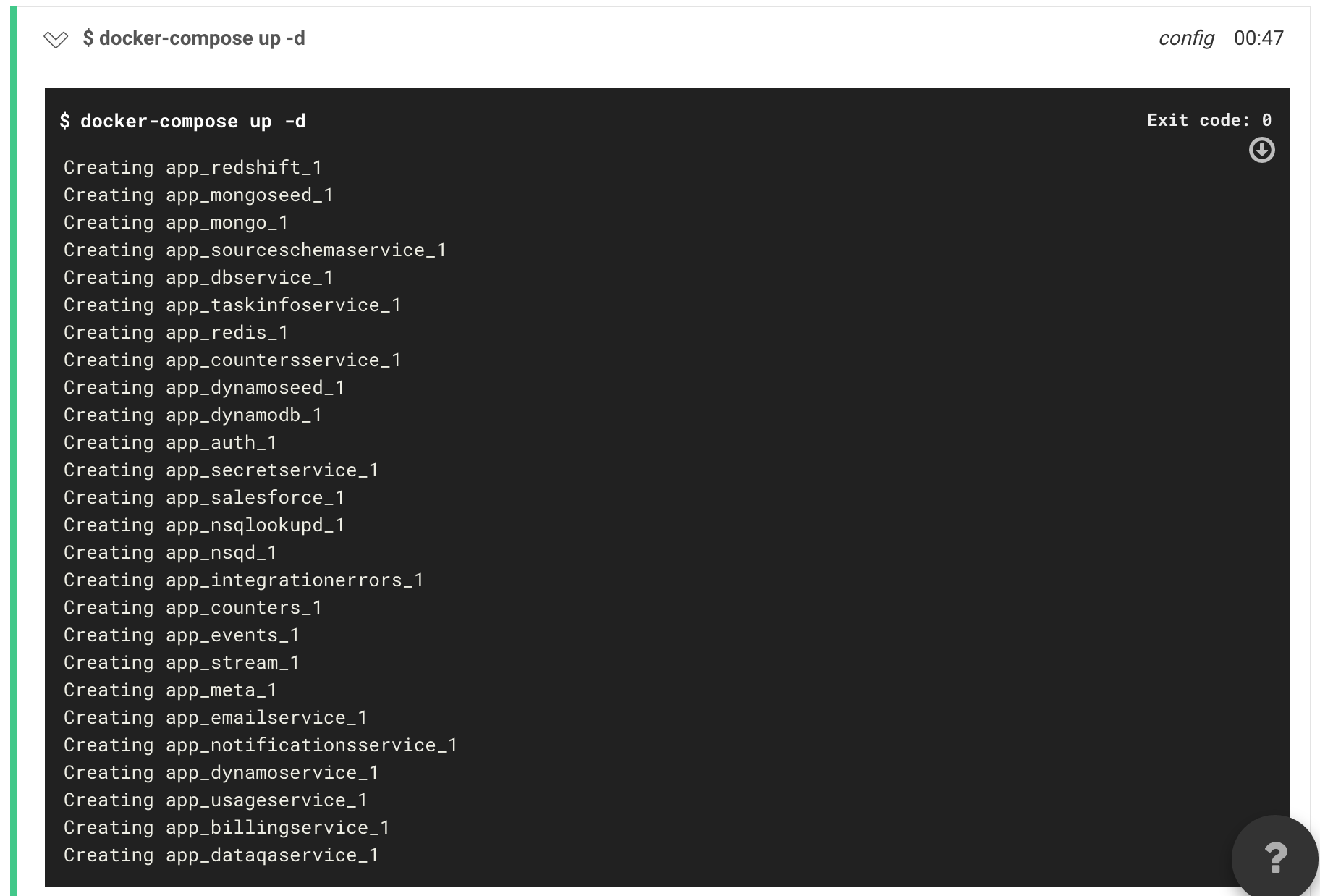 What’s more, when the images are built by CI–we can pull those same images down and run them locally as well.

To actually build that code and push it to production, CircleCI will first run the tests, then check whether the build is a tagged release. For any tagged releases, we have CircleCI build the container via a Dockerfile, then tag it and push the deploy to Docker Hub.

Instead of using latest everywhere, we explicitly deploy the tagged image to Docker Hub, along with the major version (1.x) and minor version (1.2.x).

This way, we’re able to specify rollbacks to a specific version when we need it – or deploy the latest build of a certain release branch if we don’t need a specific version (useful for local development and in docker-compose files).

The code to do this is relatively straightforward, first we detect the versions:

And then we build, tag, and push our docker images:

Once our images are pushed to Docker Hub, we’re guaranteed to have the right version of the code built so that we can deploy it to production and run it inside ECS.

Thanks to containers, our CI pipeline gives us much better confidence when deploying our microservices to production.

So there you have it: our CI build pipeline, heavily powered by Github, CircleCI, and Docker.

While we’re constantly trying to find ways to make the entire pipeline a bit more seamless, we’ve been happy with the low maintenance, parallelization and isolation provided by using third-party tools.

On that note, if you’re managing a large number of repos, we’d love to hear about your own techniques for managing your build pipeline. Drop us a note by email (friends@segment) or on Twitter!

P.S. We’ll be at CircleCI’s office hours next Thursday (June 30) in San Francisco. Please join us for a special talk on Google’s AMP project!