Learn how to 2x the output of your sales team: Gorgias automates Hubspot with Twilio Segment

If it takes more than one pizza to feed your whole sales team… then you know the struggles of interfacing with your CRM.

Data is inconsistent and poorly tagged. Instead of being able to quickly filter by the reasons you lost business (price, competitor, timing), you’re greeted by long strings of free-form text:

Worst of all, sometimes new key accounts go unnoticed until days or weeks after they’ve reached out for a demo. You’re losing business. Not because of your product, but because your growth machine isn’t working as well as it could.

This was the future facing Axelle Heems, who runs growth operations at Gorgias. Gorgias builds tools for ecommerce stores running on Shopify and Magento2. They help those stores automate their customer support and track their overall spend.

Over the past year, Gorgias has seen a soaring number of prospects requesting demos. A blessing you say? Not when your company isn’t hiring account executives at the same pace. 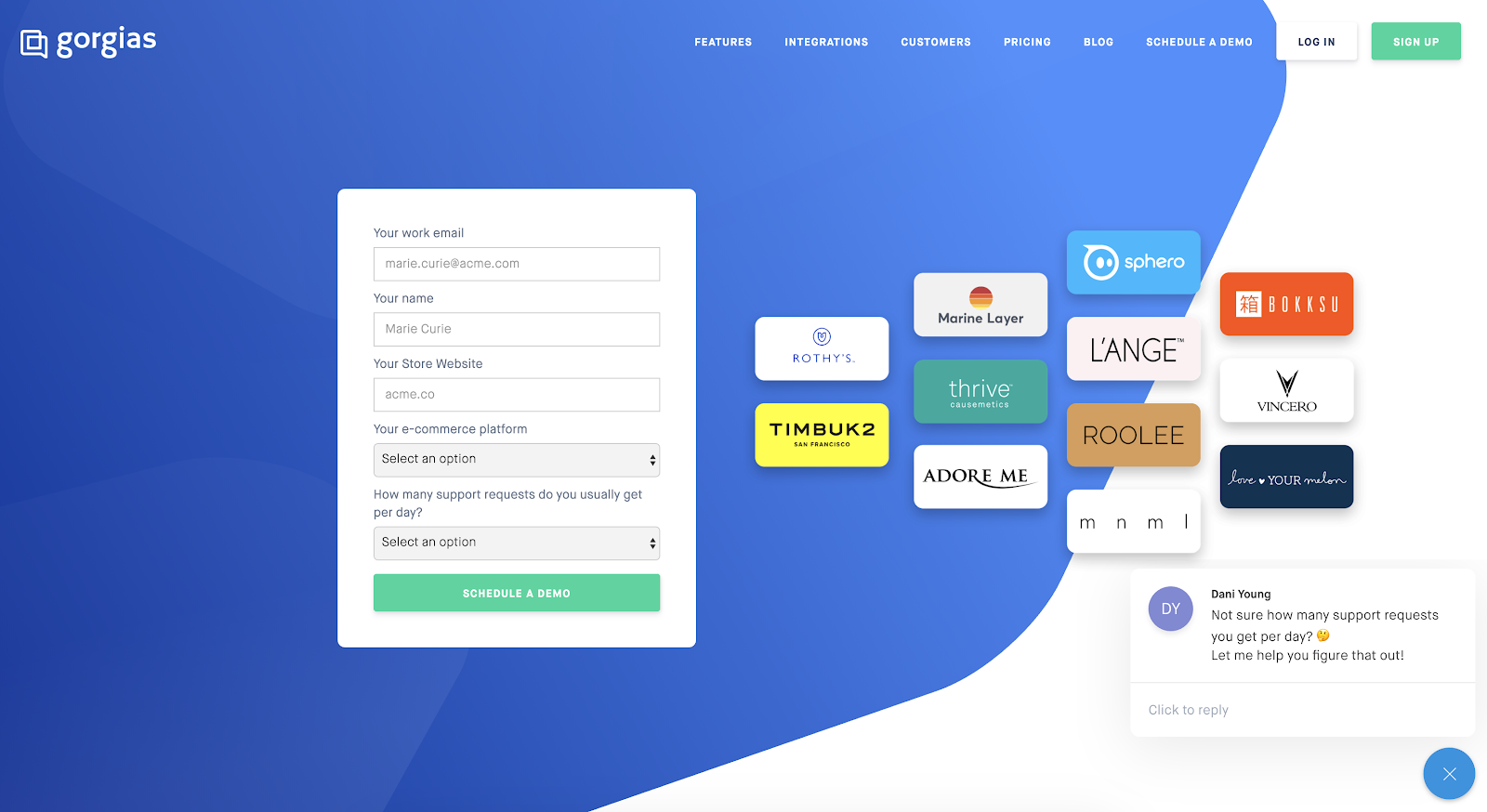 Here’s the story of how she turned their CRM from a manually updated database to a smart machine that runs their business. In this post, Axelle shares how she automated her CRM (Hubspot) to drive a 174% increase in sales.

Gorgias had one goal in mind: turn inbound prospects into paying customers.  Axelle’s first instinct was to automate some of her sales team’s in-person interactions with smaller prospects. If she could automate the sales experience for smaller customers, her team could focus their efforts on the bigger ones.

But there was one problem… it didn’t work.

The growth team then switched from automating the customer experience to instead automating the sales process. If human interaction was critical to the sales experience, then Axelle and her team would help clear the path for account executives to focus their time on delivering those moments for prospects.

Their new goal was both ambitious and unprecedented: to offer every prospect a demo.

Step 1: Lead Qualification The Gorgias team wanted to automate away everything which stopped their AEs from getting in touch with a customer. So they started with lead qualification.

In most organizations, new signups are added directly to their CRM as leads. From there, a person manually looks through all the leads and “qualifies” them to understand how good of a fit they are, and then assigns them to a salesperson. This process might take anywhere from thirty minutes to 24 hours.

But that leaves a massive problem: after 20-30 minutes, your lead has probably gone cold. So, Axelle and her team set out to solve that problem with software. 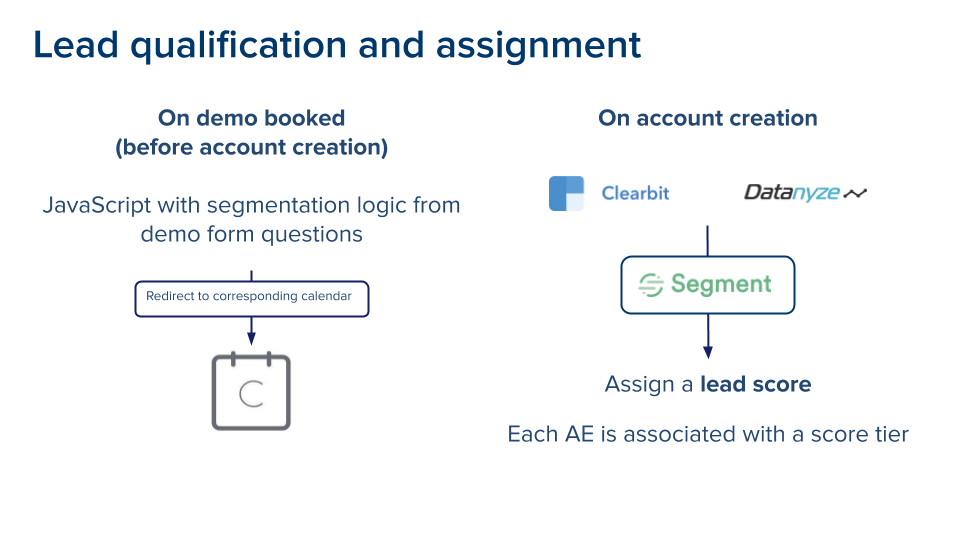 When new users click the “book demo” button, Axelle has added javascript that enables them to pre-qualify the prospect before they create an account on Gorgias. Based on their answers in the demo form, the automated process redirects the prospect to the right AE focused on their predicted value tier. All together, this means instant scheduling for a follow up meeting using Calendly.

For the prospects that create an account, the lead is also automatically qualified. Gorgias uses data collected from Clearbit and Datanyze, and routed through Segment, to qualify the lead as soon as they sign up. Clearbit pulls in company information based upon the user’s email, and Datanyze analyzes traffic patterns and technology on the user’s website. Each lead is then assigned a score that is used to match them to the right salesperson.

Step 2: Deal updates Once her growth team automated the initial deal creation, Axelle turned her attention toward the next biggest win: updating a deal in their CRM.

Looking across industries, we find that salespeople typically update records in their CRM 30-50 times per day. This means a lot of wasted time—it can take 30-60 seconds each time a salesperson updates the CRM—and the data is wildly inconsistent. So Gorgias decided to take their salespeople out of the equation.

Axelle built a system where updates about usage would flow automatically from Stripe (payments), Gong (sales conversations), and Vitally (account health/usage). All of this data flows in and out of Segment. 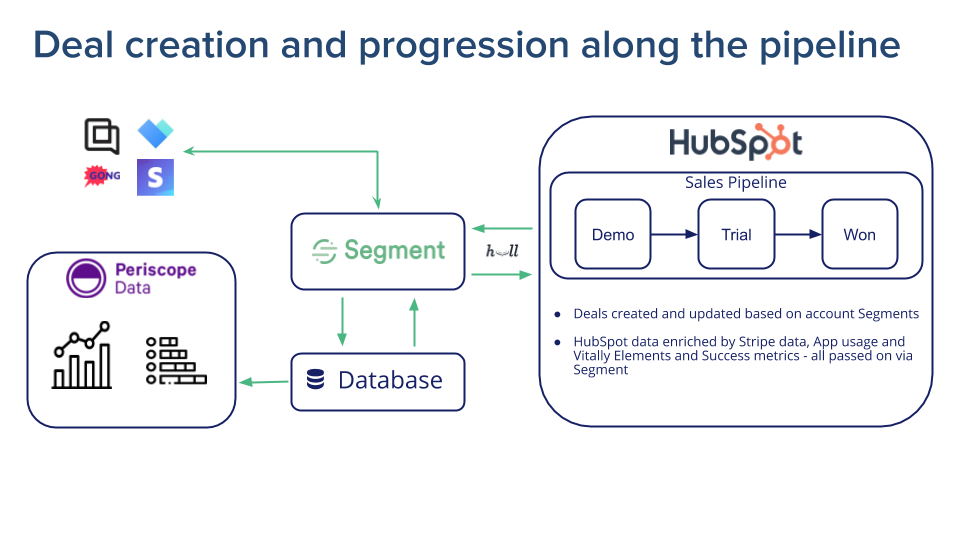 Vitally is Gorgias’s source of truth for understanding customer engagement in their app and passes Stripe data to the rest of their stack dynamically. It provides account executives with important information like “whether the prospect had signed up for a free trial”, and “whether the user has added critical integrations like Gmail or Shopify”.

Here’s a look at Gorgias’ Vitally view, complete with the elements that influence their success metrics:

As the deal progresses, Gorgias uses the events flowing through Segment to create “account properties”. As these account properties update, the salesperson is able to know more about the customer journey in real-time.

On top of that, salespeople don’t even have to manually move the deal along the pipeline. The translation of Segment data and its ingestion within workflows takes care of that for them.

To give you an idea of what this looks like, here’s a view from their HubSpot workflow builder. In this workflow, they use Vitally to translate Stripe data from user-level to account-level, send that account-level data into a Hull segment, and use Hull to specify when an account becomes a paying account. This sets the deal to “won” automatically and brings in the exact deal amount directly from Stripe. No manual effort needed. 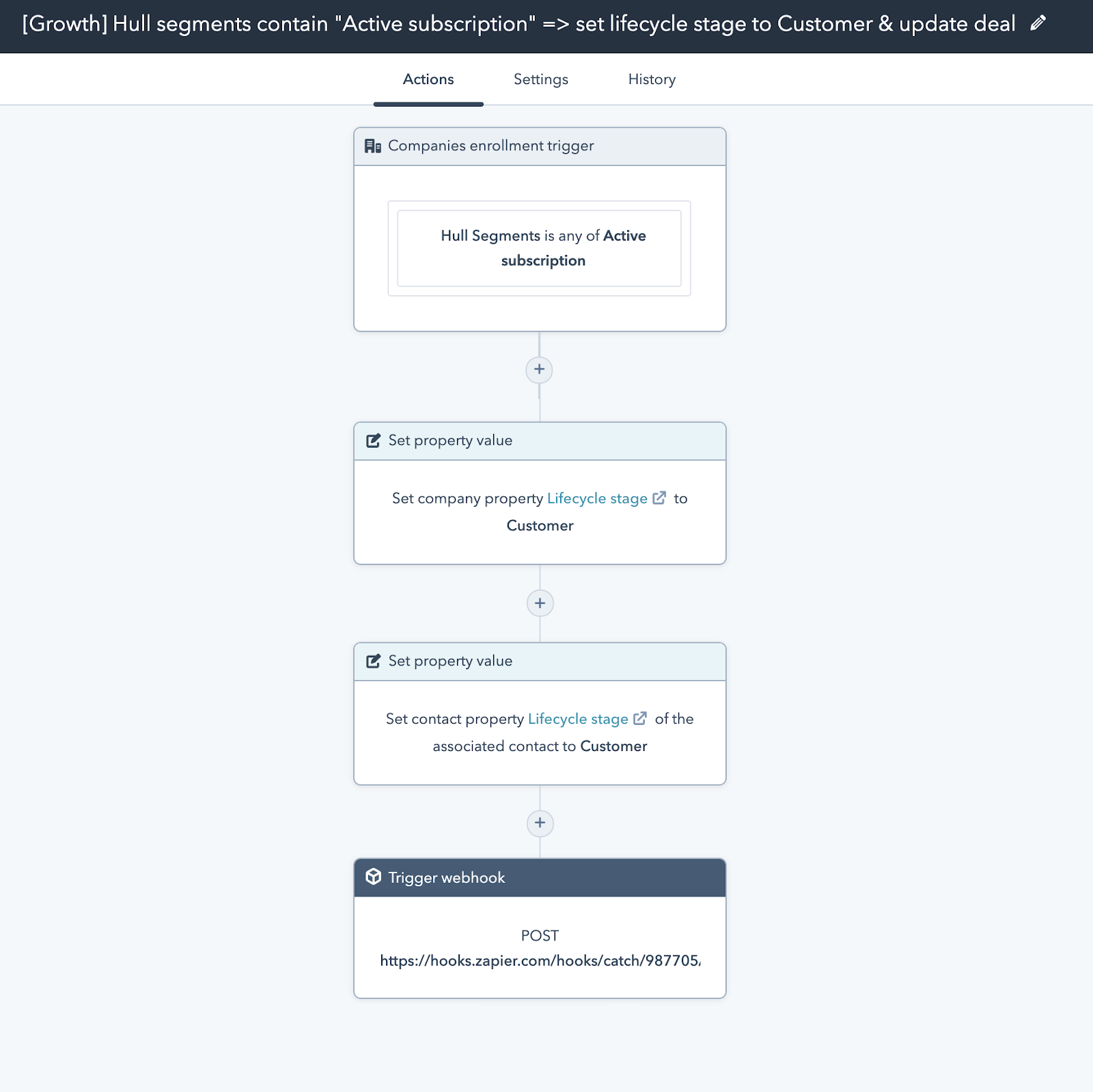 By setting up a workflow that ensures that users and accounts are set to the correct pipeline stage, Gorgias empowers their sales team to focus only on deals that have scheduled a demo or recently created an account. The rest is handled automatically.

Step 3: Reporting Now all of this sounds good in theory. But without any sort of reporting, it’s hard for Axelle to determine whether her changes are actually having impact. So she used another tool in her toolkit: Periscope. Periscope lets the Gorgias growth team create sales-dedicated dashboards powered by their Segment data.

Axelle can track deal evolution, the monthly pipeline, and seller activity all in one place that helps her identify potential improvement areas very quickly. 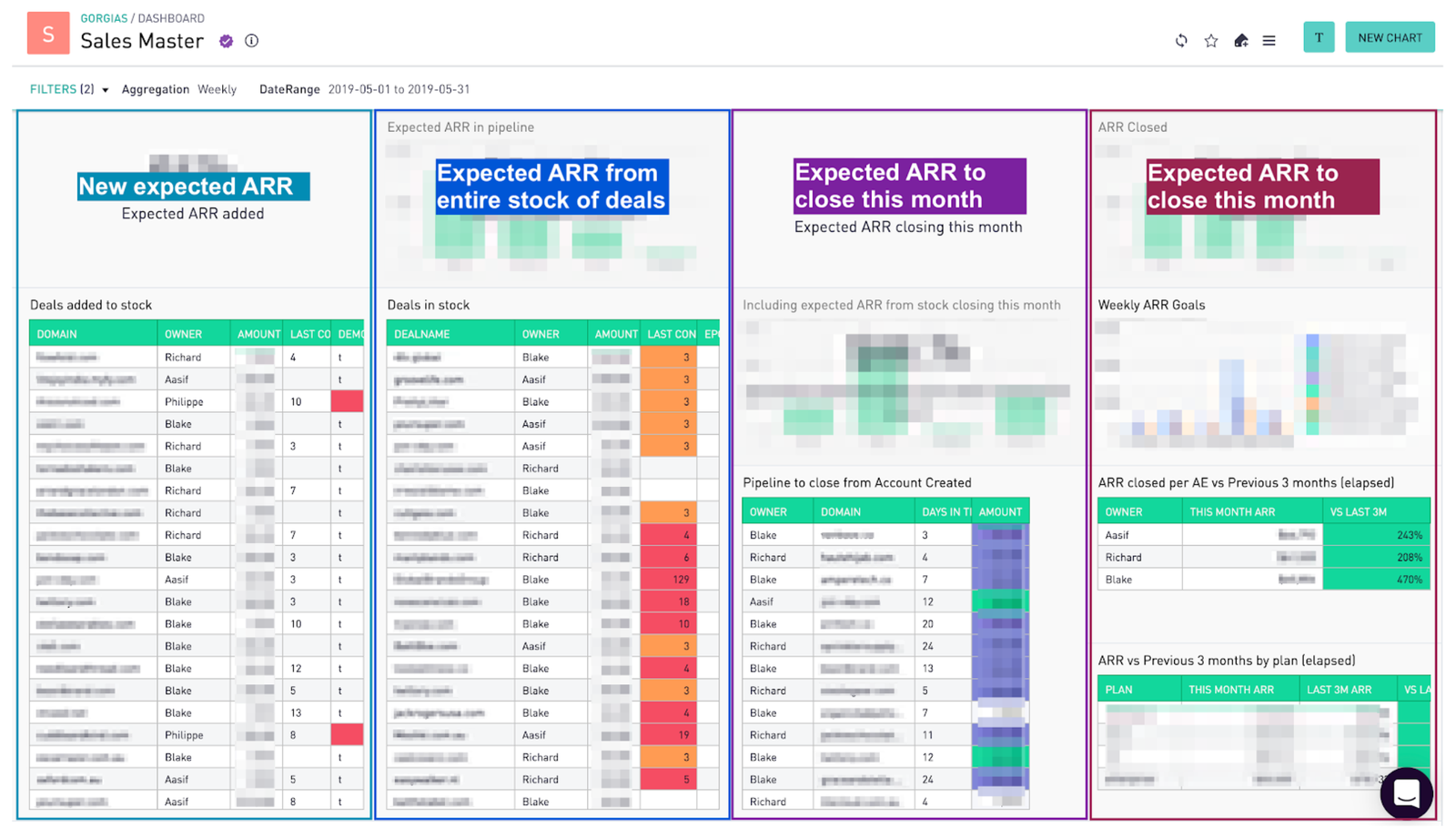 The best part? Setting this up isn’t complicated. Axelle connected their different data sources—their app, Vitally, Stripe—to Segment so all of their customer data was complete and accessible across many tools.

Overall this should take about a day of work. You need to add a bit of time for data monitoring in the beginning, but then you are good to go. It is that easy!

The results of this self-driving CRM are downright impressive:

With a little bit of this automation, each Gorgias rep is able to interact with 80+ prospects per month—more than 2x the industry average! Axelle and her growth team have created wins across the business just by figuring out the right levers to automate. Thanks to their work, the Gorgias sales team can spend more time talking with prospects, and less time wasted on manual, error-prone data entry.