The right way to manage secrets with AWS

The way companies manage application secrets is critical. Even today, improper secrets management has resulted in an astonishing number of high profile breaches.

Having internet-facing credentials is like leaving your house key under a doormat that millions of people walk over daily. Even if the secrets are hard to find, it’s a game of hide and seek that you will eventually lose.

At Segment we centrally and securely manage our secrets with AWS Parameter Store, lots of Terraform configuration, and chamber.

While tools like Vault, Credstash, and Confidant have gotten a lot of buzz recently, Parameter Store is consistently overlooked when discussing secrets management.

Before diving into Parameter Store itself, it’s worth briefly discussing how service identity works within an AWS account.

At Segment, we run hundreds of services that communicate with one another, AWS APIs, and third party APIs. The services we run have different needs and should only have access to systems that are strictly necessary. This is called the ‘principle of least privilege’.

As an example, our main webserver should never have access to read security audit logs. Without giving containers and services an identity, it's not possible to protect and restrict access to secrets with access control policies.

Our services identify themselves using IAM roles.  From the AWS docs:

IAM roles can be assumed by almost anything: AWS users, running programs, lambdas, or ec2 instances. They all describe what the user or service can and cannot do.

For example, our IAM roles for instances have write-only access to an s3 bucket for appending audit logs, but prevent deletion and reading of those logs.

How do containers get their role securely?

A requirement to using ECS is that all containers must run the EC2 Container Service Agent (ecs-agent). The agent runs as a container that orchestrates and provides an API that containers can communicate with. The agent is the central nervous system of which containers are scheduled on which instances, as well as which IAM role credentials should be provided to a given container. 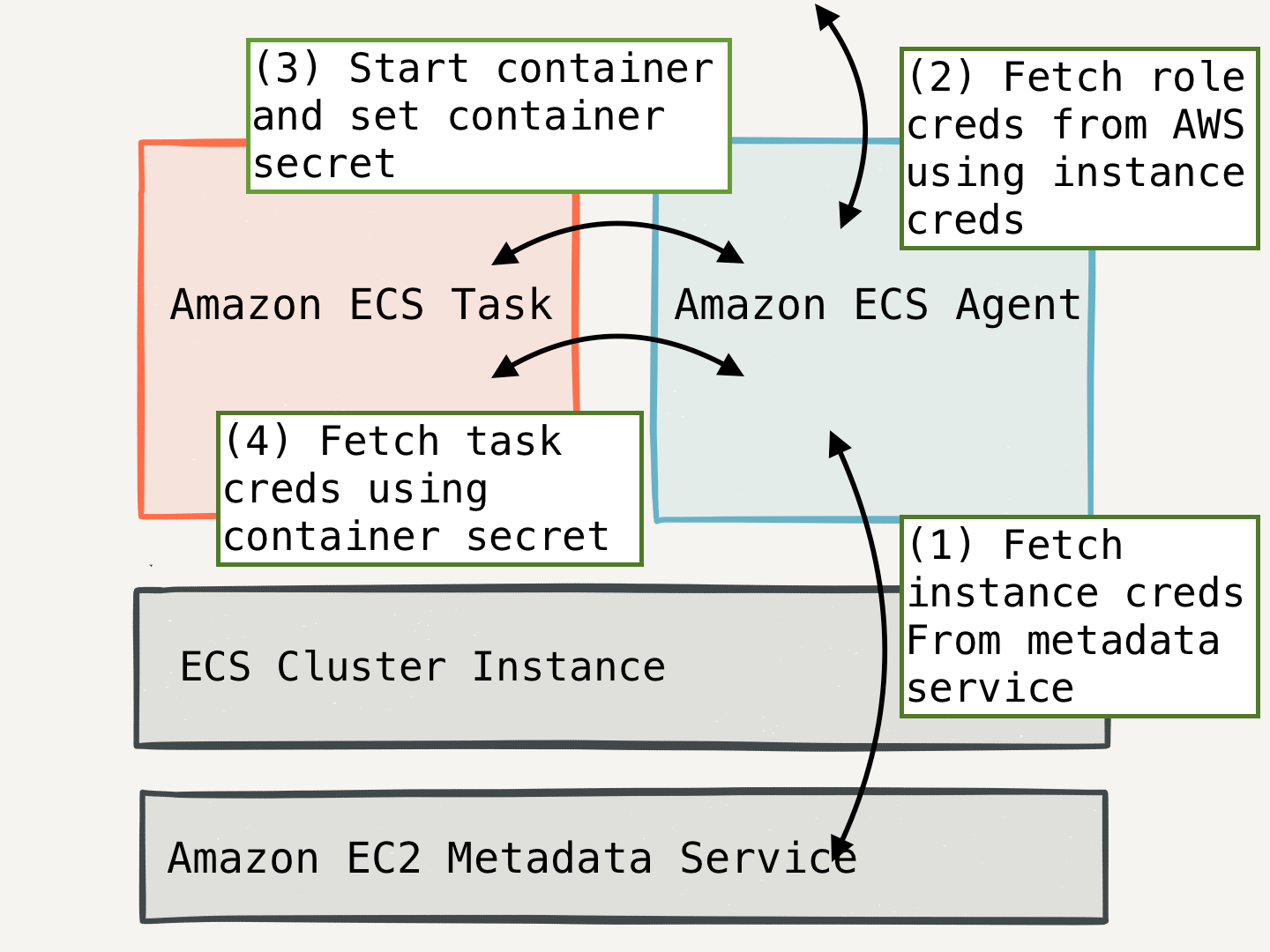 In order to function properly, the ecs-agent runs an HTTP API that must be accessible to the other containers that are running in the cluster. The API itself is used for healthchecks, and injecting credentials into each container.

Before ecs-agent starts a container, it first fetches credentials for the container’s task role from the AWS credential service. The ecs-agent next sets the credentials key ID, a UUID, as the AWS_CONTAINER_CREDENTIALS_RELATIVE_URI environment variable inside the container when it is started.

From inside the container, this variable looks like the following:

Using this relative URI and UUID, containers fetch AWS credentials from the ecs-agent over HTTP.

One container cannot access the authentication credentials to impersonate another container because the UUID is sufficiently difficult to guess.

First, it’s very important to realize that any container that can access the EC2 metadata service can become any other task role on the system. If you aren’t careful, it’s easy overlook that a given container can circumvent access control policies and gain access to unauthorized systems. 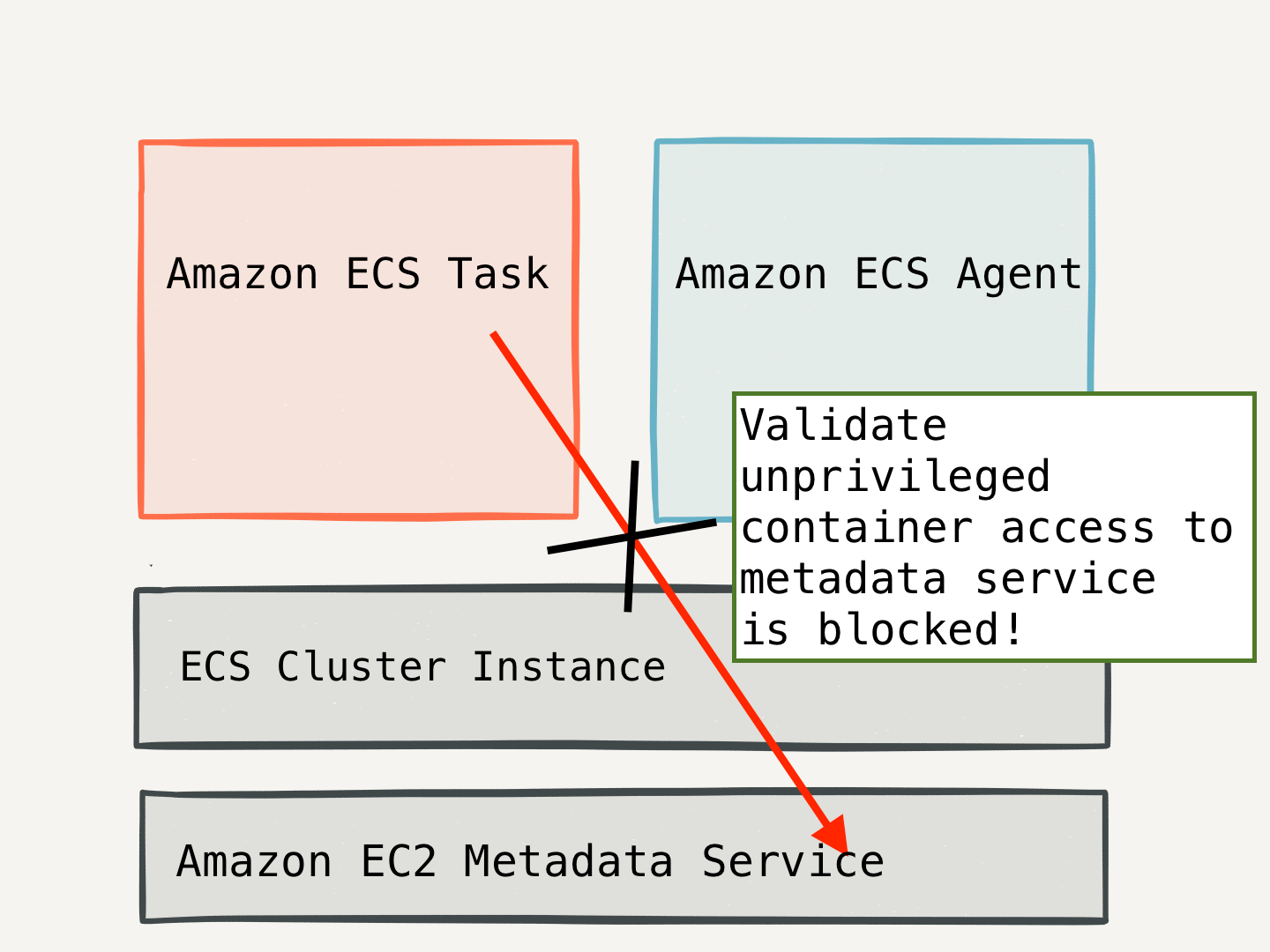 The two ways ways a container can access the metadata service are a) by using host networking and b) via the docker bridge.

When a container is run with --network='host', it is able to connect to the EC2 metadata service using its host’s network. Setting the ECS_ENABLE_TASK_IAM_ROLE_NETWORK_HOST variable to false in the ecs.config prevents containers from running with this privilege.

The principle of least privilege is always important to keep in mind when building a security system. Setting ECS_DISABLE_PRIVILEGED to true in the host’s ecs.config can prevent privileged Docker containers from being run and causing other more nuanced security problems.

Now that we’ve established how containers establish identity and exchange secret keys, that brings us to the second part of the equation: Parameter Store.

Parameter Store is an AWS service that stores strings. It can store secret data and non-secret data alike. Secrets stored in parameter store are “secure strings”, and encrypted with a customer specific KMS key.

Under the hood, a service that requests secure strings from the AWS Parameter Store has a lot of things happening behind the scenes. 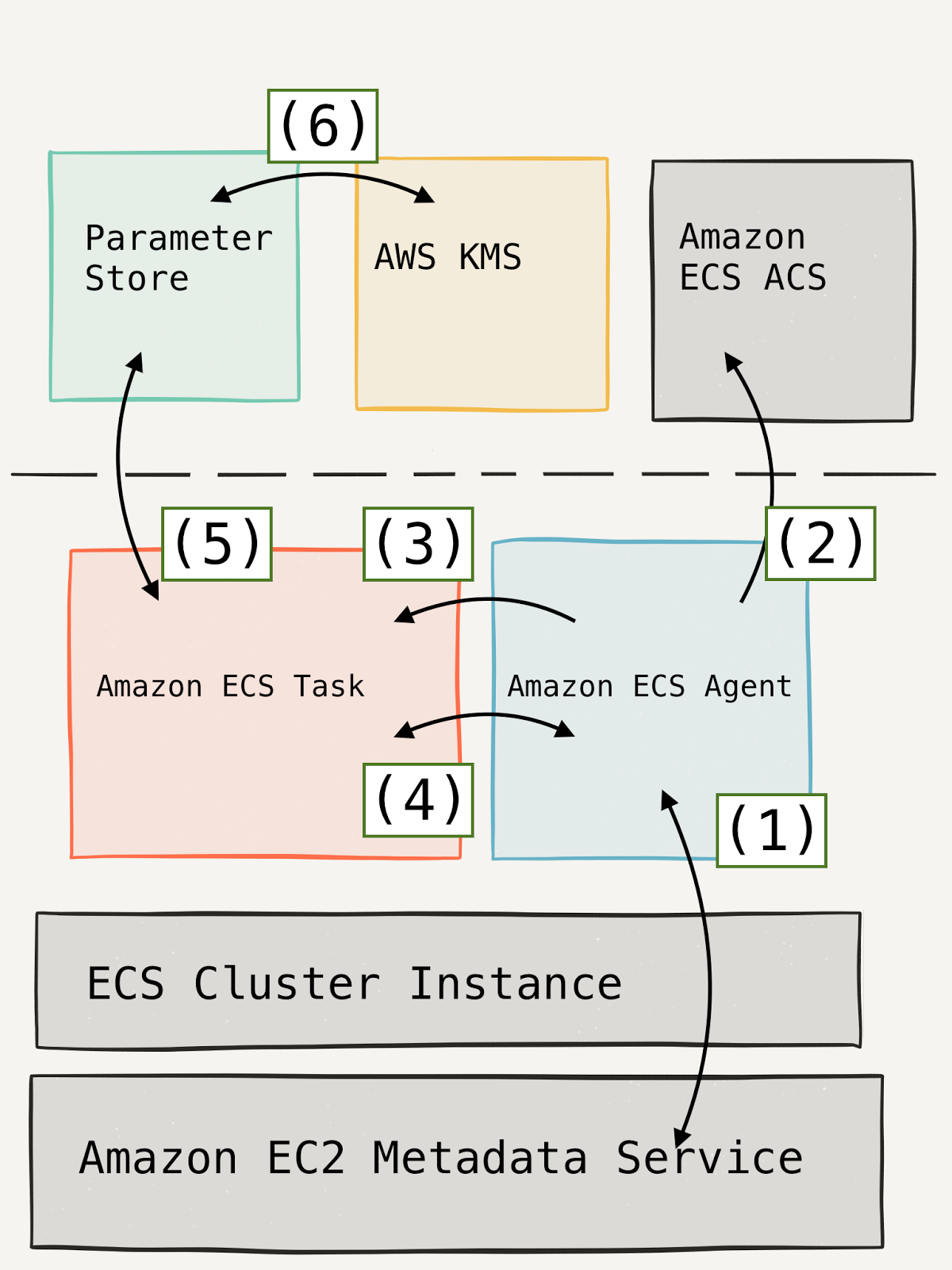 Using roles with Parameter Store is especially nice because it doesn’t require maintaining additional authentication tokens. This would create additional headache and additional secrets to manage!

Each role that accesses the Parameter Store requires the ssm:GetParameters permission. “SSM” stands for “Simple System Manager”, and is how AWS denotes Parameter Store operations.

The ssm:GetParameters permission is the policy used to enforce access control and protect one service’s secrets from another. Segment gives all services an IAM role that grants access to secrets that match the format  {{service_name}}/*.

In addition to the access control policies, Segment uses a dedicated AWS KMS key to encrypt secure strings within the Parameter Store. Each IAM role is granted a small set of KMS permissions in order the decrypt the secrets they store in Parameter Store.

Of course, creating all of these pieces of boilerplate by hand quickly becomes tiresome. Instead, we automate the creation and configuration of these roles via Terraform modules.

Segment has a small Terraform module that abstracts away the creation of a unique IAM role, load balancers, DNS records, autoscaling, and CloudWatch alarms. Below we show how our nginx load balancer is defined using our service module.

Under the hood, the task role given to each service has all of the IAM policies we previously listed, restricting access to the parameter store by the value in the name field. No configuration required.

All Segment employees authenticate with AWS using aws-vault, which can securely store AWS credentials in the macOS keychain or in an encrypted file for Linux users.

Segment has several AWS accounts. Engineers can interact with each account by using the aws-vault command and executing commands locally with their AWS credentials populated in their environment.

This is great for AWS APIs, but the AWS CLI leaves a bit to be desired when it comes to interacting with parameter store. For that, we use Chamber.

Chamber is a CLI tool that we built internally to allow developers and code to communicate with Parameter Store in a consistent manner.

By allowing developers to use the same tools that run in production, we decrease the number of differences between code running in development with staging and production.

Chamber works out of the box with aws-vault, and has only a few key subcommands:

Chamber leverages Parameter Store’s built in search and history mechanisms to implement the list and history subcommands. All strings stored in Parameter Store are automatically versioned as well, so we gain a built-in audit trail.

The subcommand used to fetch secrets from the Parameter Store is exec. When developers use the exec subcommand they use it with aws-vault.

In the preceeding command, chamber is executed with the credentials and permissions of the employee in the development account, and it fetches the secrets associated with loadbalancers from Parameter Store. After chamber populates the environment it will run the nginx server.

In order to populate secrets in production, chamber is packaged inside our docker containers as a binary and is set as the entrypoint of the container. Chamber will pass signals to the program it executes in order to allow the program to gracefully handle them.

Here’s a diff of what it required to make our main website chamber ready.

Non-docker containers can also use chamber to populate the environment before creating configuration files out of templates, run daemons, etc. We simply need to wrap their command with the chamber executable, and we’re off to the races.

As a last piece of our security story, we want to make sure that every action we described above is logged and audited. Fortunately for us, all access to the AWS Parameter Store is logged with CloudTrail.

This makes keeping a full audit trail for all parameters simple and inexpensive. It also makes building custom alerting and audit logging straightforward.

CloudTrail makes it possible to determine exactly what secrets are used and can make discovering unused secrets or unauthorized access to secrets possible.

AWS logs all Parameter Store access for free as a CloudTrail management event. Most Security Information and Events Management (SIEM) solutions can be configured to watch, and read data from S3.

By using Parameter Store and IAM, we were able to build a small tool that gives us all of the properties that were most important to us in a secret’s management system, with none of the management overhead. In particular, we get:

Best of all, these features are made possible with only a little configuration and zero service management.

Secrets management is very challenging to get right. Many products have been built to manage secrets, but none fit the use cases needed by Segment better than Parameter Store.