How COVID-19 is Impacting Tech Stacks [According to Our Data]

In a short space of time, COVID-19 is having a transformative effect on the software industry.

Existing tailwinds, like remote collaboration, e-commerce, and the shift to the public cloud, have accelerated, having a domino-like effect on the stock market.

Despite being in the midst of a global pandemic, we’re at an all-time peak of public SaaS valuations.

SaaS valuations as of 15 May 2020. Image source: Meritech Capital

As businesses start to adopt more and more software to adapt to these new circumstances, it got us thinking: which software tools have done well since the onset of COVID-19?

To answer this question, we took a look at which apps Segment users started to utilize more often in the last few months.

As a quick reminder, Segment helps over 25,000 companies collect data from their websites and mobile apps, and then route that data to over 300 different tools, whether that’s a data warehouse, a customer success platform, or a reporting tool.

By analyzing the data of how quickly our user base enables these tools on the Segment customer data platform, we’re able to get an inside look at how tech stacks have evolved since the onset of COVID-19.

The data we gathered

For our analysis, we looked at the growth of tools within the Segment catalog, as opposed to the total number of users of that tool.

The first step we took was to determine which tools our users created as a destination in the months of April and May compared to six months prior.

Then, we looked at the same period in 2019. This helped illustrate which tools have taken on new importance for our users during the pandemic.

Here’s what we found.

The fastest-growing software tools since COVID-19

The app with the biggest growth rate during March and April was Facebook Pixel, which accounted for 6.7% of all integrations on the Segment platform. 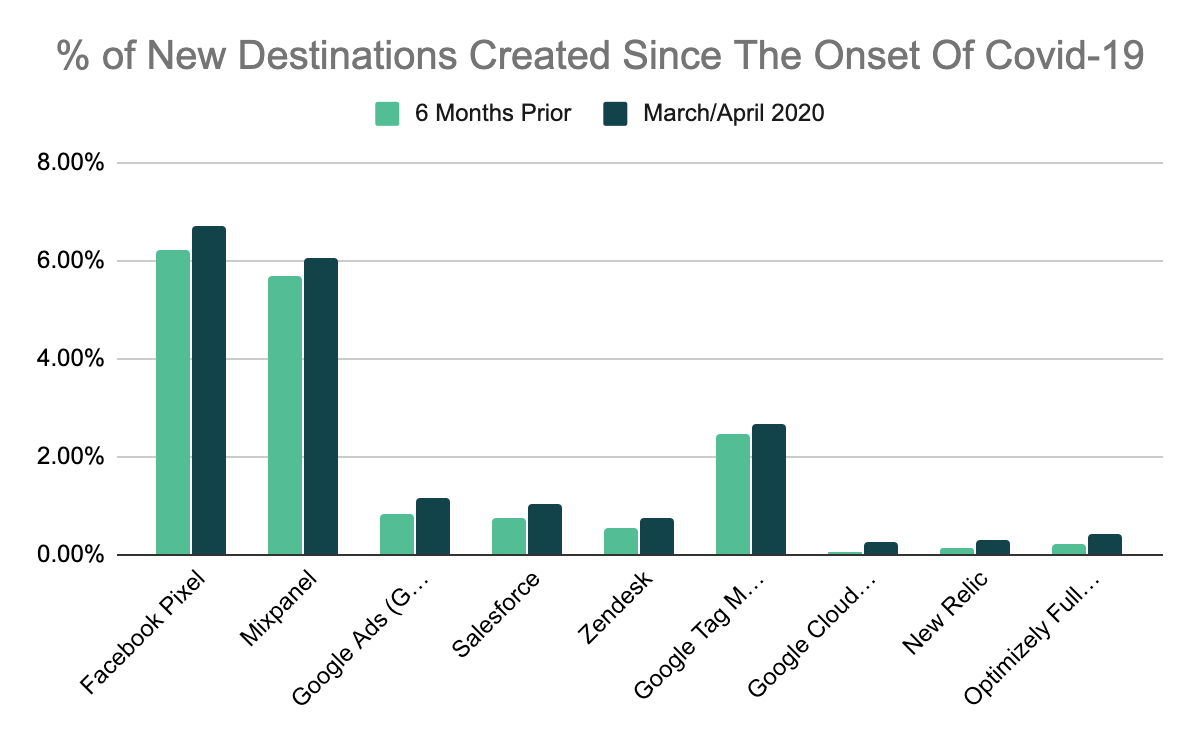 How does this stack up against the data from 2019? With the exception of Google Tag Manager, none of the below tools appeared on our list. 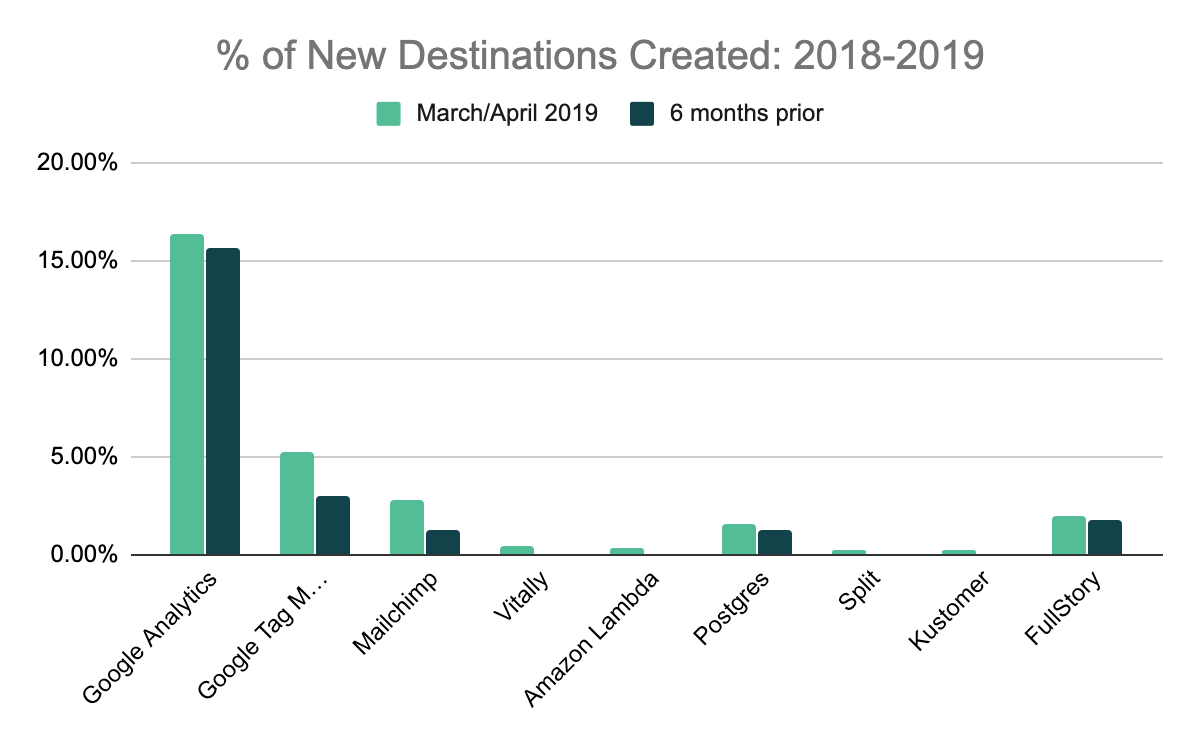 For those who follow the martech ecosystem, perhaps this isn’t surprising; thousands of new tools come and go every year.

However, we found the divergence interesting as it illustrates shifting business priorities on the back of COVID-19.

When the pandemic first broke in late February, analysts weighed in on the decrease in advertising demand, expecting it to fare worse than in the 2008 recession.

Facebook, Google, and Twitter have all expressed similar concerns on the state of digital advertising and issued weaker than expected revenue guidance for the remainder of 2020.

Both Google and Facebook ad tools show climbing adoption, indicating that many companies are using this period to play offense instead of defense.

This gets really interesting when we compare these data points to last year.

In 2019, Google had a presence in the top 10 fastest-growing apps, but primarily with tools focused on analytics (Google Analytics and Google Tag Manager). Over the past two months, Google Ads has grown fastest.

This analysis puzzled us.

In an economic downturn, logic dictates that businesses will spend less time in advertising tools, not more. Less money to spare means less money spent on anything that doesn’t directly impact the bottom line, which advertising is notoriously difficult to tie to.

👉Read: Understanding, calculating, and optimizing your advertising spend during a recession

Our hypothesis is that this growth is driven by businesses reducing wasted ad spend, not necessarily increasing ad spend overall.

More broadly, the data illustrates that businesses are going all-in on digital to match consumer behavior as more people are spending an increasing amount of time online.

In late March, Facebook reported a 70% increase in time spent across certain apps, while Twitter saw a 24% year-over-year increase in daily active users for Q1.

We’ve yet to see if this consumer behavior will hold, but even if it doesn’t, COVID-19 has accelerated the shift to digital advertising for many companies. They’ll use this time to become more sophisticated in how they place and track the performance of their digital advertising.

We expect this shift to be fairly permanent; many companies will already have been making this shift, but the pandemic has sped up their timetable.

2. Companies are doubling down on customer success

A related trend is the growing adoption of what we can broadly categorize as customer success tools.

Since March, Salesforce and Zendesk (for customer relationship management) and New Relic (for customer experience monitoring) are the 4th, 5th, and 8th fastest growing tools in the Segment catalog.

Churn is a perennial cause for concern for most businesses today (especially for Segment’s customers who skew towards subscription models), and this only becomes heightened during a pandemic. Customer success tools can help insulate companies from the worst of it and can often help grow revenue during a downturn.

👉Read: Why customer retention is the ultimate growth strategy

What’s changed in the past two months is that a broader ecosystem of customer success tools has been overtaken by some of the larger players in the industry.

We think this is indicative of consolidation within businesses' tech stacks, something backed up in our reporting from earlier this year.

Instead of using point solutions for sales, success, and customer support, businesses are leveraging the operational efficiencies of bringing all of these capabilities into one platform.

This is, however, a nascent trend, and one that will be interesting to monitor once the pandemic has abated.

Though they may not be growing as fast as last year, there is still an incredible diversity and variety of customer success tools that have broad adoption throughout the Segment platform.

COVID-19 has pole-vaulted businesses’ digital adoption ten years forward in a matter of weeks, having a knock-on effect on their tech stacks.

Where growth was the focus before COVID-19, stability, efficiency, and customer success have become the new north stars.

Finally, if the data has shown us anything, it’s that having the ability to adapt your tech stack to times of change and uncertainty is more important than ever.

What are your thoughts on this data? Tweet at us or chat with one of the Segment team about adapting your tech stack in a time of change.

Thanks to James Li and Ilan Cedillos for their help in creating this article.