It’s pretty easy to get caught up in the day-to-day motions of building out new infrastructure, launching features, and adding new integrations. But over the holidays, we took a bit of a pause to reflect on everything that happened at Segment in 2018.

As we look forward to the new year, we wanted to share a few of the highlights with the customers who helped guide our product development.

To see it visually, take a look at our 2018 infographic. For the full story, read on.

At heart, we’re a data-driven company. So to start off the review, we wanted to share some of the datapoints that we’re looking at on a daily basis.

In 2018, we hit a new record: our users enabled 86,551 new destinations over the course of the year. Assuming a 40-hour work week, our customers were turning on a new tool every 1.4 minutes of every workday.

To better understand how impactful this was, we surveyed 100 of our customers. On average, they told us it took 100 engineering hours to connect a new tool, not to mention the 21 hours of recurring maintenance per month. This might sound like a long time to just add a few hundred lines of code, but to fully QA, test, and ship to production, the time quickly adds up.

Throughout the year, that means we saved our customers and engineers more than 4,000 engineering years worth of implementation time.

Our warehouses pipeline hit its biggest day in history, loading 23 billion rows in a single day.

Even though our volume is up by 80%, we’ve only grown the number of machines running in our production infrastructure by 50%. Today, our workload on ec2 hovers around 1,200 instances running 13,000 containers, and our CPU utilization has increased by 30% since one year ago.

A big increase in end-users

We’ve also seen an explosive increase in the number of clients running Segment code. In January of last year, our Analytics.js javascript was loaded 7 billion times. In November, that number had increased to 15 billion. By our estimates, Segment’s code has run on nearly 1 billion distinct devices.

Additionally, we had a large number of new launches this year from our engineering, product, and design teams. All of these launches were driven by feedback from our customers, big and small. We tried to help simplify all aspects of data collection, management, and analysis.

Over the past three years, one of the biggest complaints we’ve heard from customers is that they have ‘bad’ data. They had events which were incorrectly tracked. Different teams collected data inconsistently. And they had trouble filtering out rogue tests to get to a ‘clean room’ state.

We’ve estimated that these sorts of mistakes and typos have caused many businesses to lose millions of dollars of business value (it’s even cost us dearly in the past). 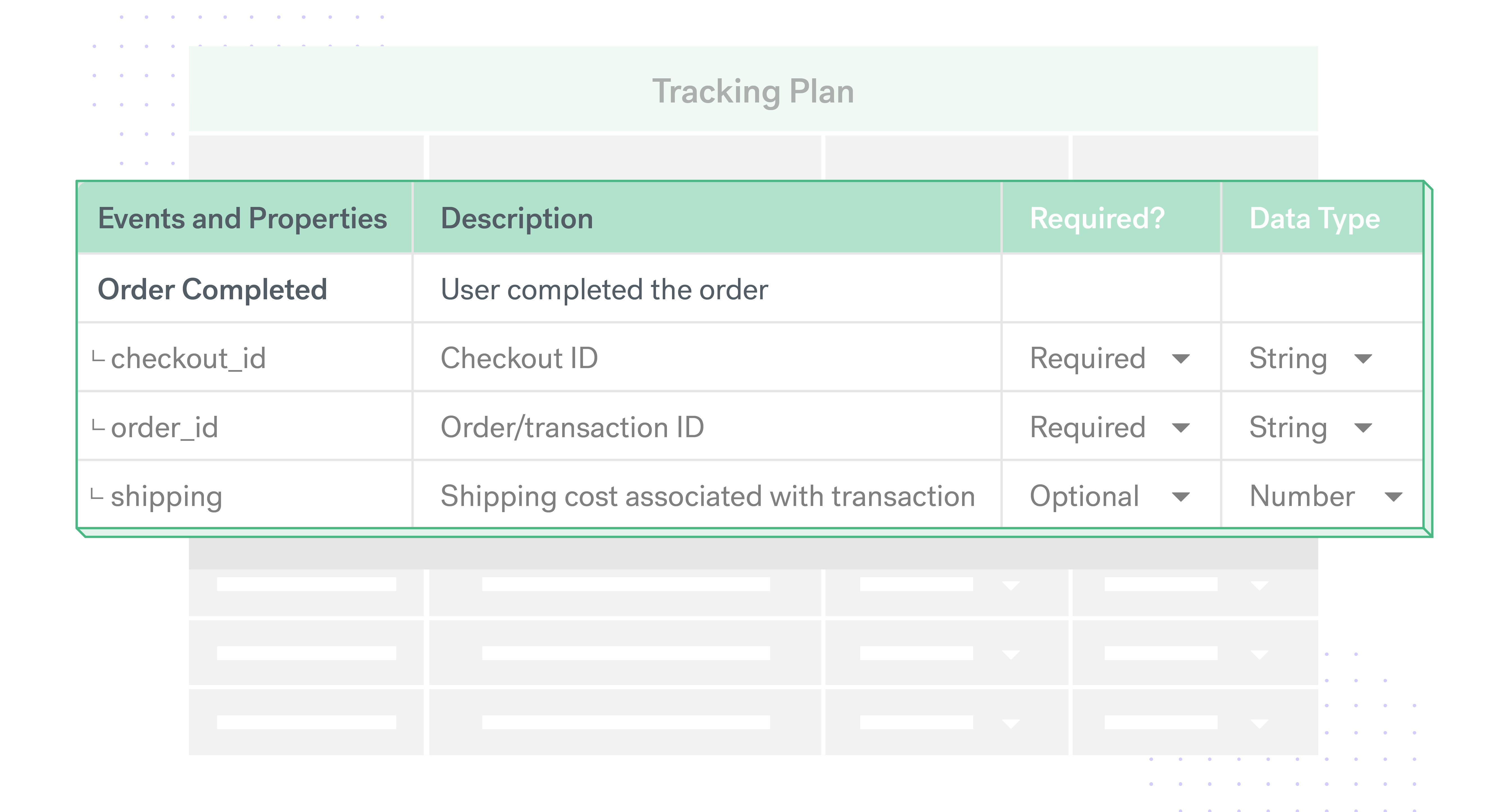 So we set out to solve the gigantic problem of bad data. We wanted to give our customers much more fine-grained controls over the events they were already sending, without changing a line of code.

Protocols gives customers the ability to align on and enforce their tracking plans, in the same workflows that they are already using to manage their data.

Since our September launch, we’ve created 500 different tracking plans for customers. In most cases, this replaces a very error-prone google sheet and manual QA process.

Additionally, this year we released Personas as a generally available add-on to Segment. 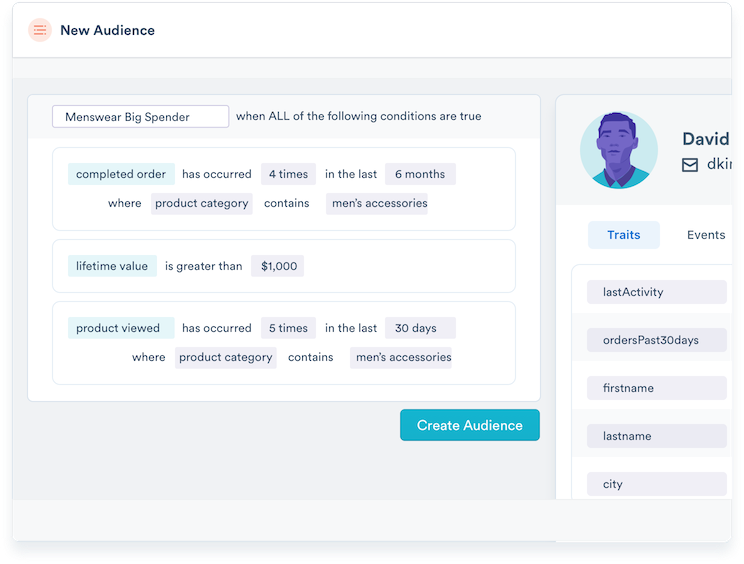 Personas adds new use cases on top of the Segment Connections product. Instead of being just a ‘smart pipe’ for all of your data, Personas allows you to create audiences and custom computations running automatically atop Segment data.

We’ve seen customers build out ideas with Personas that stretched beyond our wildest imaginations. Frame.io uses Personas as the database to make every helpdesk response personalized. Drift uses Personas to make sure they’re speaking to the right person at every touchpoint.

As of today, Personas customers have configured 1,780 traits and audiences, which means we’re running 42,000 computations per day on top of three hundred billion data points.

A year ago, one of the most common questions we received was, “what’s happening with my data?”

Customers could tell that data was getting into Segment, but weren’t able to identify what had happened to their data after that point if it didn’t arrive in their destinations. 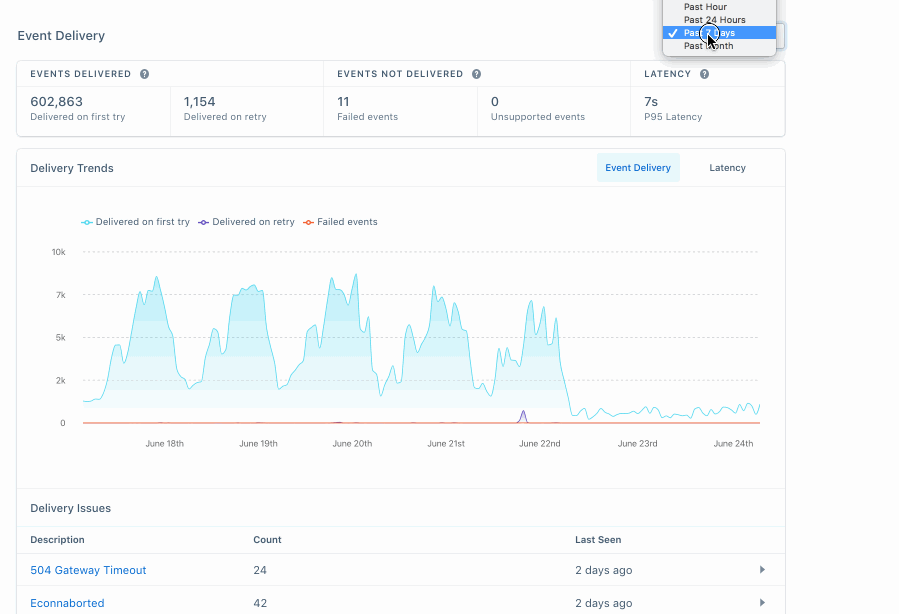 Was it stuck in transit? Was the destination API down? Had they forgotten to update their credit card, and all of their calls were being rejected?

We presented our first solution to that problem in June with our launch of Event Delivery. For the very first time, our customers could actually see the requests and responses Segment makes to all of their destinations. Even better, they could now see the automatic retries that Segment performs in the case of an error.

In surfacing this data, we’re able to show customers the 1.8% of data that would have been dropped without Segment retrying ten times over a four hour period. On average, we helped save two out of every hundred events that might’ve been dropped by rate limits, flaky networks, or dying cell phone batteries.

This year also marked an important redesign for the main Segment app.

Early on, we had evolved our navigation by bits and pieces as we added new features and parts to the product. We started with just sources and destinations. But we quickly expanded into schema rules, personas, and new tools to understand your data.

When using the app, our customers often struggled to find what they were looking for quickly. And for workspaces with many sources, it’d often take 5-10 clicks to get where you wanted to go. 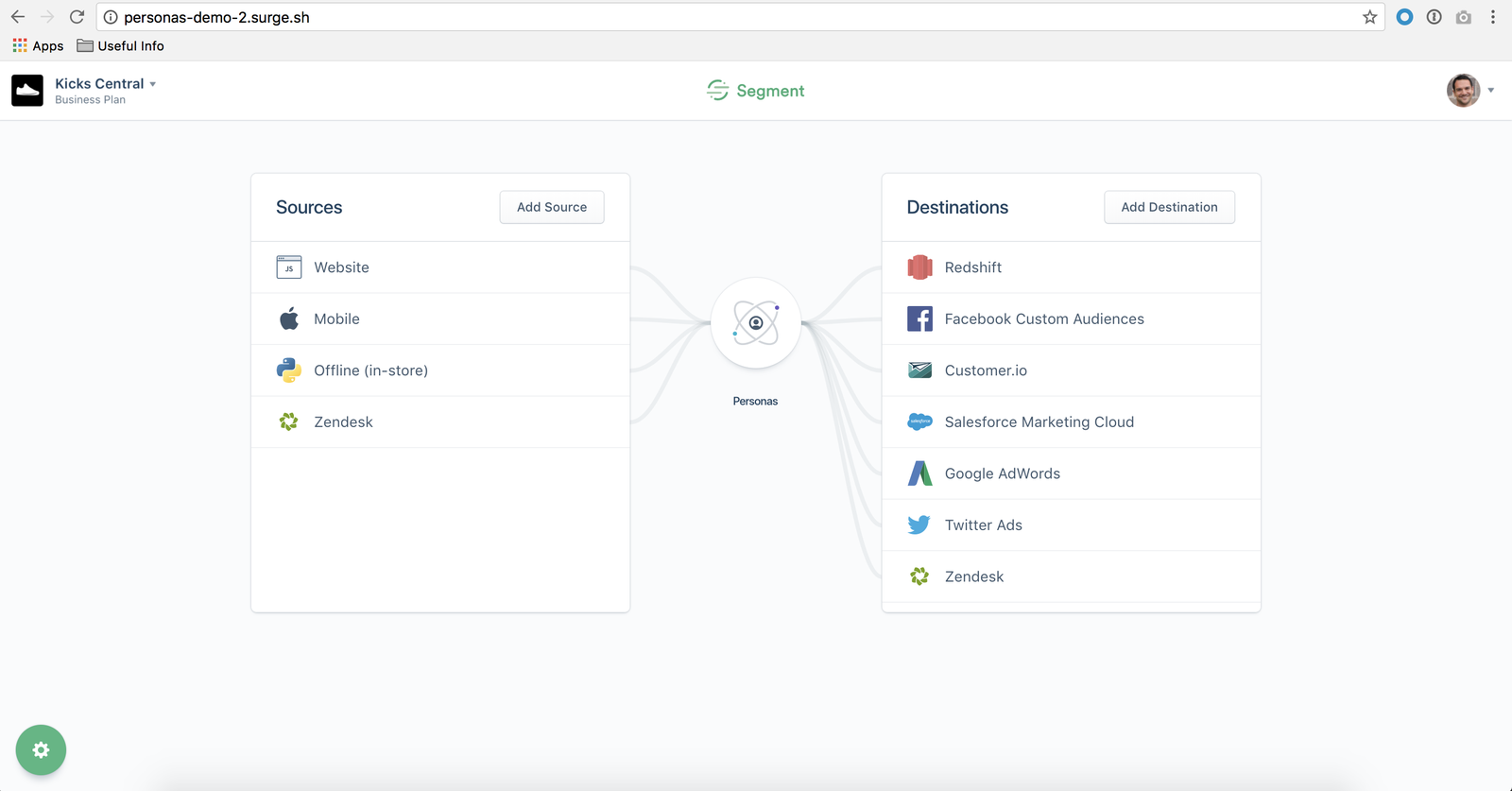 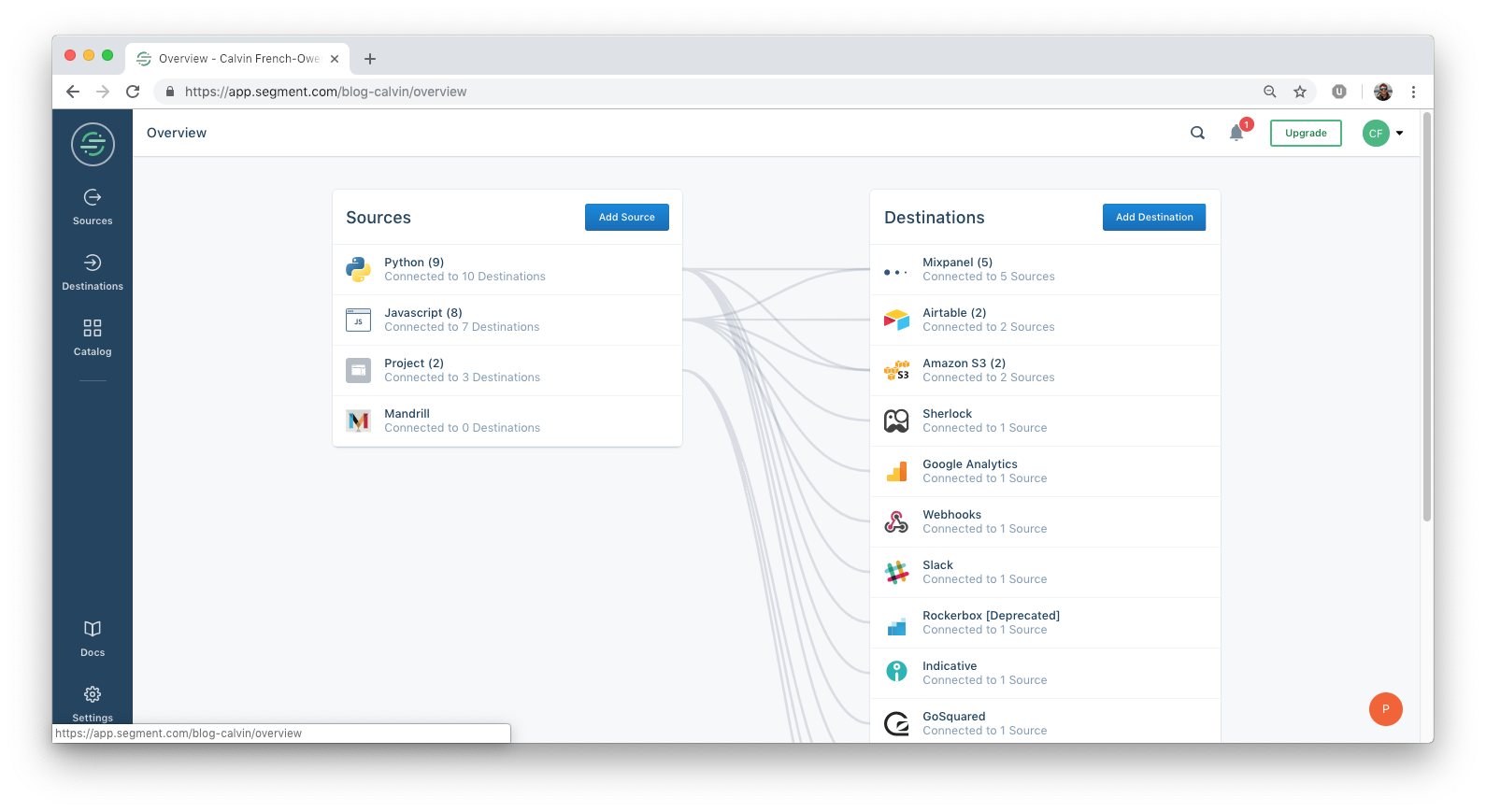 In the summer, we launched an updated navigation system, designed to scale to hundreds of sources and destinations in a workspace. Since then, we’ve aimed to minimize the amount of effort to jump between different parts of your workspace.

Our most recent addition to help is the new ‘omnisearch bar’, which allows users to quickly search any part of their workspace.

One of the biggest features we released this year wasn’t about collecting data at all. Instead, it was all about deleting, suppressing, and governing your customer data.

On May 25th, 2018, a new regulation went into effect as part of the General Data Privacy Regulation (or GDPR). If you weren’t following along directly, you probably saw a bunch of updates to the terms of service for many of the sites you interact with every day. Each of those updates granted you, the end user, the ability to request that the site forget all record of your existence.

In advance of the GDPR rollout, we launched a fully-fledged GDPR solution, designed to help companies manage their data both inside Segment and other integrations they might be using.

Today, over 300 customers have deleted 3 million different user records. We’ve been building even more robust features to give customers total control over their data.

Again and again, customers ran into issues installing Segment because it was hard to find their API keys and settings. Sometimes, it just isn’t clear what the difference is between a token vs. an API key vs. a customerId.

Finally, we launched our first ever API for managing Segment resources and provisioning: the Config API.

We’d long heard our users wanting more flexible and programmatic controls over their Segment workspace. The loudest requests came from marketing agencies which run hundreds of websites and enterprises with thousands of business units needed some form of programmatic standardization. These users were operating at a scale that our UI couldn’t match.

So we introduced the Config API. It’s built from the ground up with Envoy, Protobufs, and gRPC to make modifying hundreds of sources and destinations a breeze. It’s being used by many of our biggest customers to define their workspace in git repos, Terraform, and custom scripts.

Best of all, we were able to help out many customers achieve their goals with their data. Among some of our most exciting wins:

At IBM, one of the largest companies in the world, the IBM Cloud team wanted to get a single view of their users. Previously, they had data scattered across a number of different data silos. Using Segment, they were able to get their data in one place, A/B test with Optimizely, and grow their revenue by 70%.

At Drift, a livechat tool, Personas increased the number of positive conversations that support reps would have by 150%. A few contextual clues about the user helped make a world of difference!

At Meredith Inc, we were able to help replace a decades-old legacy analytics software over the course of about 6 months. As a company of hundreds, we’re still floored by their ability to move quickly and take advantage of the full power of Segment to re-think their data strategy.

In 2019, we’re hoping to do even more for you, our customers. More integrations, more controls for managing your data, more visibility into how it flows, and more powerful ways to use it effectively. There’s a lot more coming!